Nicodemus of the Holy Mountain

From OrthodoxWiki
(Redirected from Nicodemus the Hagiorite)
Jump to: navigation, search 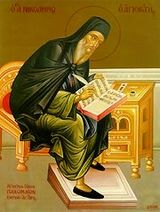 Our venerable and God-bearing Father Nicodemus of the Holy Mountain, also Nikodemos the Hagiorite and Nicodemos the Athonite, was a theologian and teacher of the Orthodox Church, reviver of hesychasm, canonist, hagiologist, and writer of liturgical poetry.

An ongoing controversy concerns the extent of Western influence over the writings of St Nicodemus. What is not disputed is that some of his works are adaptations of Roman Catholic works, in particular (1) Spiritual Exercises of Ignatius Loyola, the founder of the Jesuits, using an Italian edition with commentary by Giovanni Pietro Pinamonti (1632-1703); and (2) Unseen Warfare, which was a translation of Spiritual Combat by the Catholic priest Lorenzo Scupoli, He was not the first Athonite monk to translate a Catholic work as an Orthodox one: in 1641, Agapios Landros (17th c.) published The Salvation of Sinners, but it was simply a translation of Dialogus Miraculorum, written in the early 13th c. by a German Cistercian, Cæsarius of Heisterbach Abbey. Such works were influential at least in part due to the assumption that they were products of the Athonite monks who published them, rather than works by Roman Catholics.

There is continued disagreement about the provenance of Nicodemus' Exomologetarion, his manual for confession. Like most of his writings, and many of those from pre-modern Orthodox authors who saw themselves as writing in a tradition rather than originating new work as with the saint’s work in compiling the Philokalia, it is not an original work. Nicodemus says he compiled the “Exomologetarion” from "various teachers." In his Introduction to the work, Protopresbyter George Metallinos argues that his sources were Eastern, alleging that "he had no direct contact with Western sources” for it. Metropolitan Kallistos Ware holds that the Exomolgetarion is "mostly a direct translation" of two books on confession by the Italian Jesuit, Paolo Segneri (1624-1694)[1] Bishop Basil of Wichita in his introduction to the “Exomologetarion” (linked under sources below) argues for the edifying value of St. Nicodemus’ work from an Orthodox perspective.

The twentieth-century scholar Christos Yannaras is perhaps the severest critic of St Nicodemus' influence, seeing the negative effects of the West not only in his adaptation of Catholic books, but alleging the saint’s use of Roman canon law in The Rudder (Πηδάλιον,Pedalion), adoption of the Anselmian view of the Atonement, and acceptance of the Catholic practice of indulgences. (There is an extant letter by St. Nicodemus to Bishop Paisios of Stagai that Yannaras construes as requesting an indulgence, and promising financial payment for it.) Yannaras also sees the influence of Western pietistic moralism in Nicodemus; Chrestoethia of Christians (1803), in which he condemns musical instruments, dancing, (non-liturgical) singing, the telling of jokes, etc., and tells Christians that such conduct will lead not only to their own punishment, but to the death of their unborn children.[2] Yannaras points to both the Exomologetarion and Nicodemus' other compilation of canons, The Rudder, as imposing a Western, juridical approach to the Mystery of Repentance (Confession), saying that "This pastoral approach, however, provoked opposition, contempt or indifference in the laity: one traumatic confession in the new judicial format might make people cut their ties with the Church."[3] At least one Athonite elder, St. Porphyrios (Bairaktaris) the Kapsokalivite, also found using the Exomologetarion harsh and counter-productive and ceased to use it for that reason.[4]

Metallinos defends the Orthodoxy of Nicodemus' writings, in his introduction to the Exomologetarion,” but admits that its language "appears intensely scholastic" and in certain phrases "is repugnant to today's believer." "Admittedly, if these phrases are detached from their context, they immediately take on a cruel, sadistic character, overturning the theology of divine love which permeates the spirit of Orthodox (ecclesiastical) soteriology (see Jn. 3:16, Rom. 5:8, etc.). For this reason, it is necessary to place them in the entire context of St. Nikodemos’ thought and activity.” Metallinos also rejects Yannaras’ allegation that the saint held a Western view of the Atonement overall, while noting that the saint’s canonical collection expressed that “Penances (that is, penitential canons or rules of prayer) are a small punishment whereby the penitent appeases the great wrath that God has towards him.”

In his introduction to the 2012 edition of Chrestoethia of Christians, publisted under the tile Christian Morality, the commentator remarks on how that handbook on moral behavior reflects Orthodox ascetic tradition and Athonite "monastic propriety of his age," responding at times to "conventions upheld by the civil authorities" for a populace under a Muslim colonial regime, rather than Catholic or Pietist influence, including for example provisions about dancing.

Defenders of Nicodemus' writings have argued that his use of Western sources is a feature of the cosmopolitan context of Christian texts in the early modern period, and that his use of them has been misunderstood due to a lack of proper context for his work among scholars (Maidones). They see Nicodemus' use of the Western sources as an Orthodox alternative, from Mount Athos, to a variety of eighteenth-century cultural movements in Europe, including not only the Enlightenment, but also the aftermath of the Counter-Reformation, Pietism, and the beginning of Romanticism. That the same saint could be a prime compiler of “The Rudder” and “The Philokalia” may seem counter-intuitive to some people in the modern Western world, but the saints’ defenders argue that this is part of the complex yet rich history of Orthodox Christianity, in which any writings need to be considered in the context of the whole tradition.