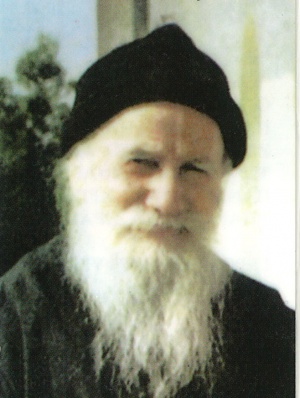 His family was quite poor and so Evangelos left school at an early age, having completed only the second class of primary school, to assist his family to make more money. At some stage, he found a job working at a grocer store in Chalkidiki and also in Piraeus. He was taught to pray the Paraklesis by his father and all other religious matters.

At age 13, he found his way to the skete of the Holy Trinity (Kafsokalyvia). Later tonsured with his monastic name of Nikitas. He became a monk at the age or fourteen of fifteen. He served in the skete of Kafsokalyvia, in the Cell of St. George, under two spiritual fathers: Fr. Panteimon and Fr. Ionnakios for six years. Forced by pleurisy to depart the Holy Mountain, he returned to his birthplace, where he was unexpectedly elevated to the priesthood at the age of 21 by Porphyrios III, Archbishop of Mount Sinai and Raithu, who recognized his spiritual gifts. With the outbreak of World War II he became a hospital chaplain in Athens, serving in the church of Saint Gerasimos, in which post he continued for three decades until his retirement in 1970. He continued to offer his service there until 1973, after which he served in Kallithea and Milesi. His later years were devoted to the construction of the Holy Convent of the Transfiguration of the Savior

In 1984 he sought to return to Mount Athos in order to occupy the same cell which he had earlier in life been forced to abandon. This was in order to fulfil his monastic vows and to avoid any honors by being buried in the world. The request was granted following the repose of the previous occupant of the cell, and so, together with three of his disciples, he returned to Mount Athos.

Having foretold to one of his spiritual children that he would repose when the number of his disciples in the cell had reached five, prepared his tomb. His blessed repose was at 4:31am on December 2, 1991.

According to his request, a vigil was served by his spiritual children and only after his burial were the fathers of the monasteries informed in order to avoid posthumous honors and praise.

On 27 November 2013 the Holy Synod of the Ecumenical Patriarchate formally glorified Elder Porphyrius as a saint, establishing 2 December as his feast day.[1][2]