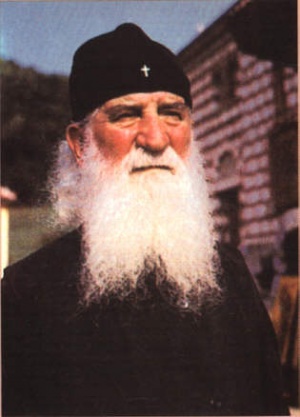 The Venerable Justin of Ćelije (aka Justin Popović; in Cyrillic Serbian, Јустин Поповић) (1894-1979) was a theologian, a champion, a writer, a critic of the pragmatic church life, a philosopher, and archimandrite of the Monastery Ćelije, near Valjevo. He was formally glorified as saint by the Holy Synod of the Serbian Orthodox Church on May 2, 2010, and commemorated on June 1 each year.

Saint Justin was born to pious and God-fearing parents, Proto Spyridon and Protinica Anastasia Popović, in Vranje, South Serbia, on the Feast of Annunciation, March 25, 1894 (April 7 by the New Calendar). At baptism, he was given the name Blagoje, after the Feast of the Annunciation (Blagovest means Annunciation or Good News). He was born into a priestly family, as seven previous generations of the Popovices (Popović in Serbian actually means "family or a son of a priest") were headed by priests.

Shortly after becoming a monk, Father Justin, along with several other students, traveled to Petrograd, Russia, to begin a year's study in the Orthodox seminary there. It was here the young monk Justin first dedicated himself more fully to Orthodoxy and the monastic way. He learned of the great ascetics of Russia: St. Anthony the Great and St. Theodosius of the Kiev Caves in Kiev, St. Seraphim Sarovsky, St. Sergius of Radonezh, St. John of Kronstadt, and others.

After his year's study and sojourn in Russia, Fr. Justin Popović entered, by the prompting of his older colleague, Fr. Nikolai Velimirovich later Bishop Nikolaj, the Theological School in Oxford, England. Justin attended the studies of theology at Oxford in the period 1916-1919, but his doctor's thesis under the title "Filozofija i religija F.M.Dostojevskog" (The Philosophy and Religion of F.M. Dostoevsky) was not accepted.

Fr. Dr. Justin was chosen, in 1934, as Professor of Dogmatics at the Theological Faculty of St. Sava in Belgrade. As the professor at the University of Belgrade he was one of the founders (1938) of the Serbian Philosophical Society along with a number of noted intellectuals of Belgrade.

He was also the professor of Dogmatics at the Faculty of Orthodox Theology of the University of Belgrade from 1934 until 1941, until the World War II. In 1945, within the perspective of the newly established communist and atheistic regime, the likes of a zealous Christian such as St. Justin, who was now beginning to convert the intellectuals to faith in Jesus Christ, had no place. Considered ineligible by the Communist party, together with a few fellow professors, he was ousted from the Faculty in 1945. As an ecclesiastical person and clergyman St. Justin spent 31 years in the Monastery Ćelije under the continuous surveillance of the Communist Party police.

Saint Justin of Ćelije fell asleep in the Lord on March 25, 1979, on his birthday, the Feast of the Annunciation (April 7 by the New Calendar).