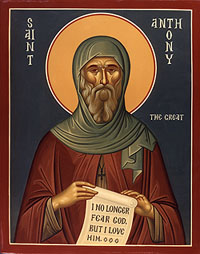 Our venerable and God-bearing Father Saint Anthony the Great was born in to a wealthy family in upper Egypt about 254 AD. Also known as Anthony of Egypt, Anthony of the Desert, and Anthony the Anchorite, he was a leader among the Desert Fathers, who were Christian monks in the Egyptian desert in the 3rd and 4th centuries AD. The Orthodox Church celebrates his feast on January 17.

One day after a teaching on Jesus saying to the people, "If you want to be perfect, go, sell what you have and give to the poor, and you will have treasures in heaven; and come, follow Me" (Matthew 19:21), St. Anthony sold everything he owned, gave the proceeds to the poor, and left the city behind to live in the desert.

Although he held no titles or position, his holiness marked him as one whose wisdom commanded respect. When the Synod of Nicea was convened, he was invited to participate. His eloquent defense of the Orthodox doctrine concerning the person of Jesus Christ was instrumental in weakening the position of Arianism. His witness led to the eventual and complete elimination of Arianism.

He instructed his followers to bury his body in an unmarked, secret grave, lest his body become an object of veneration. The monastic rules of Saint Anthony, the "patriarch" of monastic life, have served as the basis for countless monasteries.

Although it is not written by an Orthodox Christian, the French writer Gustave Flaubert provided an imaginative vision of St Antony in his play, "The Temptation of St Antony" (La Tentation de Saint Antoine), published in 1874.

"I saw the snares that the enemy spreads out over the world and I said groaning, "What can get through from such snares?" Then I heard a voice saying to me, "Humility"."

“One should not say that it is impossible to reach a virtuous life; but one should say that it is not easy. Nor do those who have reached it find it easy to maintain. Those who are devout and whose intellect enjoys the love of God participate in the life of virtue; the ordinary intellect, however, is worldly and wavering, producing both good and evil thoughts, because it is changeful by nature and directed towards material things. But the intellect that enjoys the love of God punishes the evil which arises spontaneously because of man’s laziness.”

"A time is coming when men will go mad, and when they see someone who is not mad, they will attack him saying, 'You are mad, you are not like us'."

"Whoever hammers a lump of iron, first decides what he is going to make of it, a scythe, a sword, or an axe. Even so we ought to make up our minds what kind of virtue we want to forge or we labor in vain."

O Father Anthony, you imitated the zealous Elijah.
You followed the straight paths of the Baptist and became a desert dweller.
By prayer you confirmed the universe.
Wherefore, intercede with Christ our God to save our souls.

Forsaking the uproars of life O venerable one,
you completed your life in quiet, fully imitating the Baptist.
Therefore, we honor you with him, O Anthony, Father of Fathers.