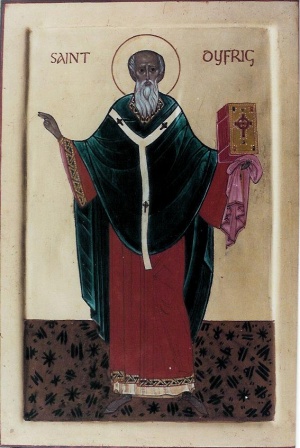 Our father among the saints Dubricius, Archbishop of Caerleon and Wales (d. November 14, 612) (also Devereux, Dubric, Dubricus, Dyffryg, Dyfrig) was an enlightener and founder of monastic life in Wales, particularly the Kingdom of Ergyng. A disciple of St. Germanus of Auxerre, he defended the Faith against Pelagianism, founded monasteries across the British Isle, and consecrated St. Samson of Dol. His feast day is celebrated on November 14.

St. Dubricius' grandfather was Pepianus Clafrog, King of Ergyng (a kingdom in southeastern Wales), who was afflicted by leprosy and foaming at the mouth. Returning from battle, the king discovered that his daughter Eurddil was pregnant and ordered her to be put in a sack and thrown headfirst into the River Wye. After multiple attempts, wherein she washed up alive on the bank, he ordered her burnt alive in a pyre. However, when Pepianus' messenger checked for bones the next day, he found Eurddil still alive, sitting with young Dubricius in her lap. Hereafter a stone was left to mark the place of his birth, which was named Madle (mad, good; lle, place) because a holy man was born there.

King Pepianus ordered his daughter and new grandson to be brought to him, at which point he embraced the infant Dubricius, who kissed and touched the face and mouth of his grandfather, miraculously curing him of his disease. The king rejoiced, forgetting his past anger, and came to love them, appointing his grandson heir of Madle and of all the island Ynys Eurddil (named after his daughter).

Soon, St. Dubricius was sent to seminary, where he excelled as a student and teacher, becoming known for his knowledge of modern and ancient law. He became ordained by St. Germanus as the first Bishop of Llandaff and Metropolitan of Cambria (Wales), and soon after founded a monastery on the banks of the Wye named Henllan. The new bishop taught both secular and religious subjects there for seven years. Faithful from all over Britain flocked to Henllan, which during his tenure held 2,000 monks, including Ss. Thelian, Kingsmark, and Samson.

Later he returned to Ynys Eurddil with disciples to teach his native people. One evening an angel appeared to St. Dubricius in a dream, telling him to go round the island and find a sow with her pigs. There, said the angel, he was to lay a foundation for a monastery and oratory in the name of the Holy Trinity. The next day, St. Dubricius and his followers sought and found on the island a sow with her pigs, where they immediately set about construction, naming the place Mochros (moch, hogs; rhos, place) and setting up residence, wherefrom St. Dubricius went about instructing and healing the sick. St. Dubricius was soon elevated to Archbishop, and given jurisdiction over all Wales.

During the season of Lent in 521, St. Dubricius visited St. Illtyd in Llandaff on the Feast of the Chair of St. Peter (January 18) to consecrate his disciple Samson, deacon, priest, and then bishop. During the ordination, both Ss. Dubricius and Illtyd saw a white dove descend onto the head of St. Samson. The bishop was given charge over the daughter house of Ynys Byr as abbot. However, having come there, Samson came to holy archbishop, saying that great jealousies arose because of his receiving the leadership of the monastery. St. Dubricius prayed, and gave St. Samson his blessing, saying, "the Lord is wonderful among his saints," returning him to calm.

On one occasion, a nobleman by the name of Gwyddgeneu came before St. Dubricius on his knees to ask help his daughter Arganhell, who had become possessed by a demon. She had to be bound feet and hands, otherwise the demon would force her to try to drown in the water, engulf herself in flame, or to bite everything in sight. At their house, the archbishop fell to the ground in tears, praying to the holy Apostle Peter for intercession, and at once the girl was cured. Becoming overjoyed, she devoted the rest of her life to God and joined a convent to serve the Lord.

After 43 years of residence at Llandaff, St. Dubricius moved the See to the city of Caerleon, which was at that time the capital of Cambria and also at one time had been the ancient Metropolitanate.

Around 545, a synod was called at the town of Brefi to condemn Pelagianism. Convening, St. Paulinus convinced St. Dubricius, the senior bishop, to allow St. David of Wales, then a minor abbot, to address them. Upon hearing the young abbot speak, it is said that St. Dubricius decided on resigning in favour of St. David.

He became a hermit and lived on the island of Bardsey with his disciples, who worked the land. The island was called the Rome of Britain due to the dangerous passage by sea to it, its lush fertility, and its sanctity—having 20,000 confessors and martyrs buried there.

On Sunday, November 14, 612, St. Dubricius reposed and was buried on the island. In 1120 on May 7, his relics were removed by Bishop Urban of Llandaff and by the 23rd moved to Llandadd Cathedral, where there was a procession and the miracle of rain during a seven-week drought.

On June 2, Urban, along with his brother the dean and his chaplain prepared the relics for reburial by washing them in a basin, which was next to two other basins, full of the relics of Ss. Thelian and Oudoceus, who had been in descending order the next two Bishops of Llandaff. Placing the relics into their basins, the three men were astonished as the water began to bubble and became very hot. Bishop Urban took an arm bone of St. Dubricius and placed it into the water, watching as it began to move for an hour on its own. The three thanked God for the miracle and placed the relics in a tomb before the altar of the Theotokos in the monastery.

For the receiving of these relics, the Archbishop, Ralph of Canterbury, had given his blessing for the construction of a greater monastery in honour of Ss. Peter the Apostle, and the Bishops Dubricius, Thelian, and Oudoceus of Llandaff.

Churches named after St. Dubricius include the Anglican churches in Ballingham, Herefordshire, and Llanvanches, one belonging to the Church of Wales near Newport, and a Roman Catholic church in Treforest.

In some legends, Caerleon is said to have been the capital of King Arthur's Court, wherein he was crowned by St. Dubricius. This is supported by Geoffrey of Monmouth's Historia Regum Britanniæ, and expounded upon by Alfred, Lord Tennyson, in his Idylls of the King.

Arthurian scholar Norma Lorre Goodrich in her book Merlin, claims that St. Dubricius and Merlin were actually the same person, as Merlinus Ambrosius Dubricius, who reputedly lived in the same time period.

Thou art worthily honoured as the Father of Welsh Monasticism. O Hierarch Dyfrig,
labouring to establish true asceticism with thy brother in the Faith, Samson of Dol
whom thou didst raise to the dignity of the episcopate.
In thy pastoral love, O Saint,
pray for us that despite our unspiritual lives
Christ our God will grant us great mercy.