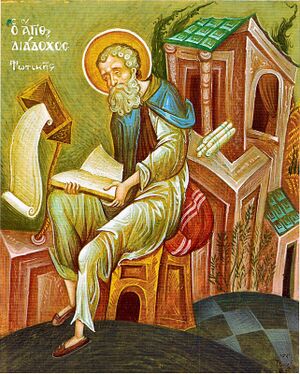 Our venerable and God-bearing father Diadochos of Photiki was a fifth century ascetic whose work is included in the Philokalia.

Scholars have acknowledged his great influence on later Byzantine saints such as Maximos the Confessor, John Climacus, Symeon the New Theologian, and in general the Hesychast movement of the 14th century. He has also had great influence in the West via the "De vita contemplativa" of Julian Pomerius (+ 498).

His feast day is commemorated on March 29.

Saint Diadochos was born c. 400 and died sometime before 486. He became bishop of Photiki (Photicé), a small town in the province of Old Epira, in the Northwest part of present Greece. In 451, he took part in the Council of Chalcedon as Bishop of Photiki.

He was most likely part of a group of Epiran notables who were captured by a Vandal raid between 467 and 474. The group was then released in North Africa, somewhere around Carthage, where all vanished. His exact date and place of death are thus unknown.

Diadochos' writing and ascetic practice were greatly influenced by Evagrius the Solitary (Pontique) and Saint Macarios of Egypt (the Great), incorporating their ideas of hesychia (Greek ησυχία, "stillness, rest, quiet"), sensible spiritual experience, and the fierceness of the fight against the demons.

In all his work Diadochos appears as a true champion of the Orthodox doctrine of Chalcedon. In fact, his best known work, the 100 Chapters on Spiritual Perfection, was written for his monks in reaction to strange doctrines coming from the heretical Messalian sect in Mesopotamia (or Euchists).

Some authors have misunderstood the role of Saint Macarius in Mesopotamia and concluded that Diadochos wrote this main work against him. This, however, is not the case, as St. Macarius' role was merely to salvage from within the Messalian heresy those who were there by chance or just mislead by the ambiguous discourses of the heresy.

In the 100 Chapters, Diadochos shows himself as bishop worried about the orthodoxy of his flock and as a clear actor in the spiritual fights of his time. Also, Chapters 13 & 91 of his work show us a real Christian man of prayer, united to God, discovering the "life in Christ" and wanting to share its goodness with his readers.

"Spiritual discourse always keeps the soul free from self-esteem, for it gives every part of the soul a sense of light, so that it no longer needs the praise of men. In the same way, such discourse keeps the mind free from fantasy, infusing it completely with the Love of God. Discourse deriving from the wisdom of this world, on the other hand, always provokes self-esteem; because it is incapable of granting us the experience of spiritual perception, it inspires its practitioners with a longing for praise, it being nothing but the fabrication of conceited men. It follows, therefore, that we can know with certainty when we are in the proper state to speak about God if during the hours when we do not speak we maintain a fervent remembrance of God in untroubled silence.

Whoever loves himself cannot love God; but if, because of 'the overflowing richness' of God's love, a man does not love himself, then he truly loves God (Ephes. 2,7). Such a man never seeks his own glory, but seeks the glory of God. The man who loves himself seeks his own glory, whereas he who loves God loves the glory of his Creator. It is characteristic of the soul which consciously senses the Love of God always to seek God's glory in every Commandment it performs and to be happy in its low estate. For glory befits God because of His majesty, while lowliness befits man because it unites us with God. If we realize this, rejoicing in the glory of the Lord, we too, like Saint John the Baptist, will begin to say unceasingly, 'He must increase, but we must decrease.'"

History : Adaptation & translation of the preface of the French edition "Migne"