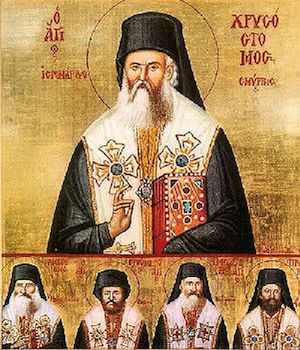 Our Father among the saints, Chrysostomos (Kalafatis) of Smyrna ((Greek)

He was notable for his charity work and for having been deeply involved in the politics of his day. He was lynched and brutally murdered by a Turkish mob incited by Nureddin Pasha in Smyrna on September 9 1922, soon after the Turkish army regained control of the city at the end of the Greco-Turkish War (1919-1922), and sent the Greek population into exile. He is also known to be the founder of the sports club Panionios.

He is commemorated on the Sunday before the Feast of the Elevation of the Holy Cross, together with the other Holy Hierarchs of Asia Minor: Ambrosios of Moschonision, Euthymios (Agritellis) of Zela (†1921), Gregorios of Kidonion (†1922), and Procopius of Iconium. 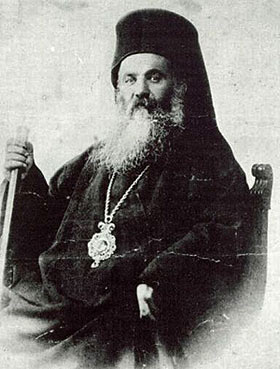 In 1902 he was elected Metropolitan of Drama by the Holy Synod of the Ecumenical Patriarchate. Drama, located in Eastern Macedonia, had a predominantly Greek population but at the time was part of the Ottoman Empire and was engulfed in the Balkan Wars. The metropolitan worked to encourage the Greek population to build schools and churches, take back churches occupied by the Bulgarians, and to build athletic centers, hospitals, and nursery schools.

His actions led to his exile on August 30, 1907, by the Turkish authorities. On May 10, 1910, he was elected Metropolitan of Smyrna. During World War I and the persecution of the Greeks of Anatolia by the Ottoman Empire, he helped members of the Greek population to take refuge in the Greek islands of the Aegean. Additionally, he served as a spokesman for the civilian population to diplomatic officials and the world press. The German ambassador in Constantinople wrote that Chrysostomos "stands to the best of living clerics." His actions resulted in a second exile on August 20, 1914, when he left Smyrna for Constantinople.

Following the end of the world war, he returned to Smyrna. On May 2, 1919, the Greek army occupied Smyrna in accordance with the terms of the Treaty of Sèvres. Chrysostomos continued his work with the Greek population while also supporting the needs of the Turkish and Armenian populations.

He was notable for his charity work and for having been deeply involved in the politics of his day. The American Consul at Smyrna, George Horton, wrote in his book The Blight of Asia, that he "was there [in Smyrna] up until the evening of September 11, 1922, on which date the city was set on fire by the army of Mustapha Khemal." Horton refers to "Metropolitan Chrysostom" several times:

"on one occasion I was present at an important service in the Orthodox Cathedral, to which the rep­resentative of the various powers, as well as the principal Greek authorities, had been invited. The [Hellenic] High-Commissioner [for Ionia, Aristidis Stergiadis, which Horton spells 'Sterghiades'] had given the order that the service should be strictly religious and non-politi­cal. Unfortunately, Archbishop Chrysostom (he who was later murdered by the Turks) began to introduce some politics into his sermon, a thing which he was extremely prone to do. Sterghiades, who was standing near him, interrupted, saying: 'But I told you I didn’t want any of this.' The archbishop flushed, choked, and breaking off his discourse abruptly, ended with, 'In the name of the Father, Son and Holy Ghost, Amen,' and stepped off the rostrum."[2] 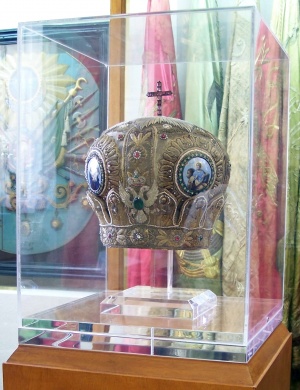 After the defeat of the Greek Army in Anatolia and the reoccupation of Smyrna by the Turks, Chrysostomos refused to leave Smyrna and abandon his flock. The metropolitan was abducted by a mob incited by Nureddin Pasha on September 9, 1922. According to eyewitness accounts, he was tied to a barber chair, cruelly tortured, and put to death.

"According to the French observers,...'The mob took possession of Metropolitan Chrysostom and carried him away,...a little further on, in front of an Italian hairdresser named Ismail...they stopped and the Metropolitan was slipped into a white hairdresser's overall. They began to beat him with their fists and sticks and to spit on his face. They riddled him with stabs. They tore his beard off, they gouged his eyes out, they cut off his nose and ears.' The French soldiers were disgusted by what they saw and wished to intervene, but their commanding officer was under orders to remain strictly neutral. At the point of a revolver, he forbade his men from saving the metropolitan's life. Chrysostom was dragged into a backstreet in the Iki Cheshmeli district, where he eventually died from his terrible wounds."[3]

Professor Marjorie Housepian (Hovsepian) Dobkin remarks in her book The Smyrna Affair that "The Archbishop's murder was reported to Admiral Dumesnil aboard the French flagship."

Metropolitan Chrysostomos was survived by his nephews, among whom Yannis Elefteriades, who witnessed the arrest and execution of his uncle, having found shelter by his side after the killing of his parents. He escaped to Lebanon, as a refugee, where today, his grandson Michel Elefteriades is a well-known Greek-Lebanese politician, artist and producer.