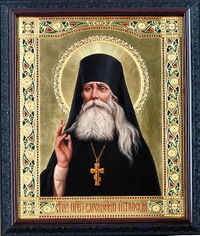 Paul (Pavel) Ivanovitch Plikhankov was born in the city of Samara on July 5, 1845, in the day of commemoration of St. Sergius of Radonezh. He was the son of John and Natalia Plikhankov. His mother died in childbirth, and his father soon remarried so that his son would have a mother. Although his stepmother was very strict, she was a real mother to him, and he loved her very much.

Descended from the Orenburg Cossacks, Paul enrolled in the Polotsk Cadet Corps to pursue his education and a military career. After completing his studies at the Orenburg Military School, he received a commission as an officer. Later, he graduated from the Petersburg Cossack Staff Officers' School and then served at the headquarters of the Kazan military district. He eventually rose to the rank of colonel.

At that time, Paul did not thought about entering a monastery. He imagined monastic life as "a terrible boredom - there is only radish, vegetable oil and prostrations". But his life became more and more ascetic. Once he met St. John of Kronstadt who approached Paul and kissed his hand without saying anything. Paul was told afterwards by other people who were there that it means that he would be a priest.

Once Paul found a journal with an article about Optina Monastery. He decided to visit St. Ambrose of Optina and ask which monastery to enter. Elder Ambrose and elder Anatolius were waiting for Paul and became very happy, as Paul recalled later, though they saw him for the first time. St. Ambrose said that Paul should wait for 2 more years and then return to the monastery.

In 1881, Paul contracted pulmonary pneumonia. At his request his orderly read the Gospel to him. As the orderly read, Paul passed out and saw a vision. It was a miraculous vision in which the heavens seemed to open and, as he became afraid because of the great light, his whole sinful life passed before him, and he was overcome with repentance. Paul heard a voice telling him to go to Optina Monastery. At once, Paul received the gift of spiritual vision. According to St. Nectarius of Optina, "in one night, according the Lord's assent, he became an elder". While the doctors did not think he would recover, his health did improve. Fr. Ambrose blessed him to cut all ties to the world and told him to enter Optina within three months.

Resigning his commission within the specified three month period proved not to be easy. Obstacles were placed in his way including a request to delay his retirement and an offer for promotion to the rank of general. Only his stepmother was happy that he wished to become a monk. He was finally able to close his affairs and moved to Optina to find that Fr. Ambrose had died.

Fr. Anatolius had succeeded Fr. Ambrose as Elder, and he assigned Paul to Hieromonk Nectarius, as his cell attendant. He was accepted as a novice on February 10, 1892 as a member of the brotherhood of the St. John the Baptist Skete. On March 26, 1893, he was tonsured a rassophore. During the next ten years Paul advanced through the stages of monastic life, including ordination as hierodeacon, on December 29, 1902, and hieromonk, on January 1, 1903. In December 1900, the monk Paul was secretly tonsured into the mantiya because of a serious illness. When he was asked what name he wished to receive, he said it did not matter. So, he was named Barsanuphius in honor of St. Barsanuphius of Tver and Kazan. Although he recovered, they did not give him the mantiya until December 1902 after a Liturgy when it was revealed that he had been tonsured on his sickbed.

On September 1, 1903, Fr. Barsanuphius was appointed to assist Elder Joseph, the skete Superior, in the spiritual direction of the skete brethren as well as the sisters of the Shamordino convent.

The gift of clairvoyance of Fr. Barsanuphius was particularly evident during the Sacrament of Confession. He saw the whole life of the confessing person in detail. Many times he helped people who were concealing sins for many years to confess outspokenly.

When the Russo-Japanese war began in 1904, Fr. Barsanuphius was sent to the Far East as a military chaplain to minister to wounded soldiers at the St. Seraphim of Sarov Military Hospital. When the war ended in August 1905, Fr. Barsanuphius returned to Optina on November 1, 1905.

By 1908, Fr. Barsanuphius felt ill more often and began to speak of his approaching death. In April 1908, he received from someone a package containing the Great Schema. Fr. Barsanuphius had long desired to be tonsured into the Great Schema before his death, but he had told no one other than the archimandrite. Therefore, he regarded this as a sign that he would soon die.

In 1910 Fr. Barsanuphius was sent with the Holy Gifts to Leo Tolstoy who was dying at the train station Astapovo. But the relatives and doctors did not allow him to approach the ailing. Fr. Barsanuphius was saying later with a deep sadness: "Although he was Leo, but he was unable to break the ring of the chain with which Satan bound him".

On July 10, 1910, Fr. Barsanuphius became so ill that he left church during Vigil to return to his cell. The next morning he could not sit up by himself. That evening he was tonsured into the Great Schema.

Appointment to Old-Golutvin Monastery and repose

As Fr. Barsanuphius recovered from the illness, problems arose from the new monks who had come from the spiritually lax environments. Not understanding the ascetical nature of monasticism or the whole idea of eldership, they began to demand reform and change. They also wanted to assume positions of authority and to close the skete. In 1912, in the face of these issues and by complaints and denunciations, Fr. Barsanuphius was removed from Optina and was assigned as igumen of the Old-Golutvin Monastery near the town of Kolomna. The monastery was founded by St. Sergius of Radonezh whom Fr. Barsanuphius always considered his patron saint being born at his commemoration day. The monastery was in a state of physical and spiritual decline. Nevertheless, he did not lose heart. Two months later the monastery began to revive and more people began to visit it once they heard that an Optina Elder had come to Goluvin. The financial position of the monastery also improved. However, again rebellious brethren caused him great sorrow, and he had to expel some of them.

Early in 1913, Fr. Barsanuphius became ill again and asked Metr. Macarius of Moscow for permission to retire to Optina. But, that was not to be. He fell asleep in the Lord on April 1. His body remained in the church of Golotvin until April 6 (which was also Lazarus Saturday). After the funeral, his body was placed on a train and sent to Optina for burial. The train arrived at Kozelsk Station on April 8, and the coffin was carried to Optina by clergy for burial.