Optina Pustyn, officially Svyato-Vvedenskaya Optinakaya Pustyn[1], is a male monastery near Kozelsk which was the most important spiritual center of the Church of Russia in the nineteenth century. The monastery was famous for the monastic renewal movement in Russia based on the hesychastic tradition that had been largely lost in the Russian monastic experience in the eighteenth century. 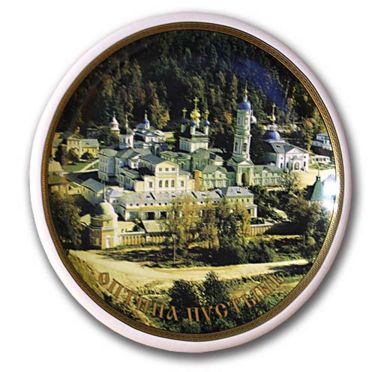 It is not clear when the hermitage was established. Optina as a monastery had existed since at least the sixteenth century. The monastery is located about 80 miles from Moscow. It had fallen in disrepair in the eighteenth century under the anti-monastic policies of Peter I and Catherine II. In 1790, Metr. Platon of Moscow undertook the restoration of the monastery.

During the late eighteenth century monasticism in Russia enjoyed a revival, significantly influenced by the works and spirituality of the Elder Schema-monk Paisius Velichkovsky, which was spread by his many monastic disciples. At Optina his works found a ‘headquarters’ from which his spirituality expressed in the hesychastic tradition spread throughout Russia. A visible manifestation this spirituality at Optina was conveyed by the lineage of divinely enlightened spiritual fathers, startsy, plural of starets, who served as spiritual guides for the many people who came to the monastery for holy counsel during the nineteenth century.

In addition to counseling, the monastery, through the initiative of Elder Macarius, began publishing patristic texts, an activity in the Church that had been seriously curtailed by Peter I’s reforms. Hieroschema monk Macarius also began editing manuscripts of the translations by Paisius Velichkovsky and his followers of Greek versions of patristic works. Thus, began an effort by the monks of Optina that resulted in production of some 125 books with over 225,000 copies of works by St. Isaac the Syrian, St. Symeon the New Theologian, St. Nilus of Sora, and others that were distributed throughout Russia and was a counter to the secular press that was publishing translations of mystical-philosophical works from the West.

Most of the buildings on the monastery were built in the nineteenth century. A heritage was built for the startsy near the monastery in 1821. Large crowds of devout Christians were attracted to Optina Pustyn, including many notables such as Nikolai Gogal, Ivan Turgenev, Feodor Dostoyevsky, Vasily Zhukovsky, and Vasily Rozanov.

The Bolshevik revolution of 1917 halted the works of the monks. The monastery was closed and the startsy were forced to leave. Some of the Fathers were able to maintain a life at the monastery as an ’agricultural legion’, but in the end the monastic Fathers were dispersed, to die in exile, in prison and labor camps, or to be executed. The buildings of the monastery went into disrepair and some of the structures were demolished.

With Perestroika and the thaw in the atheistic policies of the Soviet government concerning the Church of Russia, Optina Monastery was re-established in 1987. It was one of the first monasteries returned to the Church. This event was followed by the glorification of the Optina startsy in 1990 by the Synod of the Russian Church abroad and in 1996 by the Moscow Patriarchate.

The Synaxis of these Saints of Optina is commemorated on October 10.