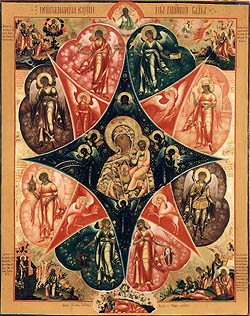 The Most Holy Theotokos the Unburnt Bush icon is commemorated by the Church on September 4. Sometimes it is called the Burning Bush icon.

The icon is based on the miracle witnessed by Moses in the Old Testament. In the book of Exodus, God calls Moses on Mt. Horeb from the midst of a bush which "was burning, yet it was not consumed." The Church sees the Unburnt Bush on Horeb as a type of the Most Holy Theotokos, who gave birth to Christ while still while remaining a virgin. 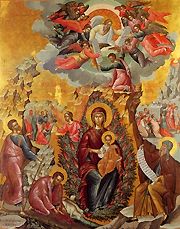 One of the earliest depictions of the Mother of God as the Unburnt Bush shows her holding her divine Son in the midst of a burning bush. Moses is shown to one side, removing his sandals, for that place was holy (Exodus. 3:5).

An icon from the Solovki Monastery, painted in the 16th to 17th centuries, shows the Heavenly Jerusalem depicted on the chest of the Theotokos. In the four corners of the icon are prophecies, the hierarchies of angels and nature surround her. The presence of the Ancient of Days is in the eight-pointed star. 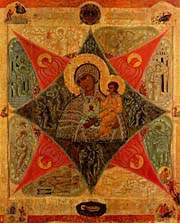 Most icons now depict the bush in a symbolic fashion with two overlapping diamonds. A red diamond represents fire, and a green diamond represents the bush. The two diamonds form an eight-pointed star with the Theotokos shown in the center.

The symbols of the four Evangelists: a man for St. Matthew, a lion for St. Mark, an ox for St. Luke, and an eagle for St. John, are in the four corners of the green diamond. These symbols are derived from Ezekiel 1:10 and Revelation 4:7. The red diamond has archangels depicted in its four corners.

The design of the icon has become more complex over time. Now we can see archangels, Moses and the burning bush (Ex. 3:2), Isaiah and the seraphim with the burning coal (Is. 6:7), Ezekiel and the gate through which only the Lord may enter (Ez. 44:2), and Jacob with the ladder (Gen. 28:12). The Theotokos is shown holding Jacob's ladder, which leads from earth to heaven. Sometimes the Root of Jesse (Isaiah 11:1) is shown in the center of the icon's lower border.

The Church keeps the tradition of the Holy Fathers and its Ecumenical Councils that the flame Moses saw was in fact God's Uncreated Energies or Glory, as Light (compare with the Transfiguration of Jesus), which is why the bush was not consumed. He allowed Moses to see his glory (his energies), which, like his essence, are eternal. When God spoke to Moses, Moses heard the pre-Incarnate Word (Logos), of God. The vision of God's glory as light in this life and the next is the Orthodox definition of salvation, even moving after death "from glory to glory" eternally.

To the Orthodox, the miracle of the Unburnt Bush is understood in the theology and hymnography of the Church as a prefiguring of the virgin birth of Christ. The Theotokos gave birth to the Incarnate God without suffering harm, just as the bush was burnt without being consumed. Other commentators identify the Unburnt Bush with the early Christians who suffered persecution at the hands of the pagan authorities but were never defeated.

Tradition tells the story of a fire which was consuming several wooden buildings. An old woman stood in the midst of the fire, in front of her house, holding an icon of the Unburnt Bush. A witness happened to see her there and marveled at her faith. The next day he returned to the spot and was astonished to see the old woman's home completely unscathed by the fire, while all the other houses around it were destroyed.

The Mother of God, through her Icon of the Unburnt Bush, is regarded as the protector of homes from fire.

It is believed that the earliest icons of the Unburnt Bush originated at St Catherine's Monastery on Mt. Sinai.

You showed Moses, O Christ God,
An image of your most pure Mother
In the bush that burned yet was not consumed,
For she herself was not consumed,
When she received in her womb the fire of divinity!
She remained incorrupt after her pure childbearing!
By her prayers, O greatly merciful One,
Deliver us from the flame of passions,
And preserve your people from all harm!