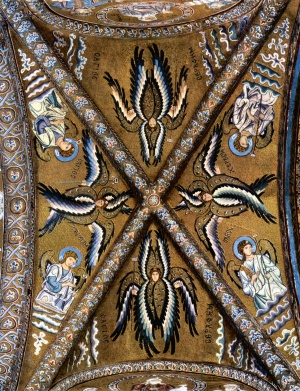 The six-winged Seraphim are the angels closest to God (Isaiah 6:2) who, due to their closeness to God, resemble fire (Hebrews 12:29; Daniel 7:9; Exodus 24:17; Psalms 103:4). Due to this closeness to God, and their appearance, they were given the name 'seraphim', which in Hebrew means 'flaming'. They are aflame with love for God and kindle others to such love.