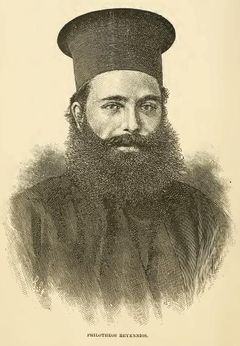 Philotheos’ secular name was Theodore, although his surname is unknown. He was born in 1833 in the Tatavla quarter in Constantinople, of poor parents, and was first educated in the local schools there.

Because his parents lacked the necessary resources in order for him to continue his education, he was obliged to chant in the Church of St. Demetrios, in the same neighborhood. Eventually he came under the tutelage of the then Bishop of Cyzicus (and later Ecumenical Patriarch) Joachim II. With the assistance of Bishop Joachim he was accepted into the Theological School of Halki.

After the completion of his studies, along with his being proclaimed as a teacher of Orthodox theology, he was ordained a deacon. Simultaneously he received his clerical name Philotheos. In honour of his having excelled as a graduate of the School, he also received the epithet “Bryennios”, which was given to him by the then principal of the school Constantine Typaldos.

After graduating in 1856, he received a scholarship as an endowment of George Zarifis, and traveled to Germany, where he continued his theological and philosophical studies in the universities of Leipzig, Berlin and Munich.

Early in 1861 he was invited by Patriarch Joachim II to Constantinople, and was appointed professor of church history, hermeneutics and other theological courses at the Theological School of Halki.

In 1863 he was ordained to the priesthood as an Archimandrite. Simultaneously he succeeded the principal of the Theological School of Halki, Constantine Typaldos, who had retired due to old age.

Bryennios was accused by writers such as G. Gregoras and A. Mexis of politically opposing Typaldos by being the leader of the "liberal" party, against the "conservative" one (which had been led by his former principal). Their confrontation was probably due to the fact that Bryennios had just returned from Germany and wanted to impose the application of scientific methods in theological research – something which caused the adverse reaction his old teacher.[note 2]

Characteristically, it is reported that Bryennios was first to start wearing pants beneath his robes, instead of the traditional baggy-Turkish-trousers.[note 3]

In September 1863, Joachim resigned from the patriarchal throne, and Bryennios lost a powerful protector. Eventually he was pressed to resign from his seat as principal of the Theological School of Halki.

Principal of the Great School of the Nation

In 1867 when Gregory VI (1867-1871) was raised to the ecumenical throne for the second time, Philotheos was appointed the principal and a professor at the Great School of the Nation in Phanar.[note 4] He directed the School for the next seven years. During his tenure there, he was honored by the Greek government with the golden cross of the Knights of the Royal Order of the Redeemer. During the same period he also served as member of the Central Education Committee, vice-president of the Seminary Education Association, and curator of the Central Seminary.

In 1872 he participated in the work of the Local Synod which addressed the Bulgarian problem.[note 5]

Finally, in 1875, together with Archimandrite John Anastasiadis and Deacon Philaretos Vafeidis, he represented the Ecumenical Patriarchate in the Old Catholics Reunion Conference held in Bonn.

When he returned from Germany, Patriarch Joachim II (who had risen again to the patriarchal throne from 1873) asked Philotheos to be the Metropolitan of Serres, because this metropolis was in need of a bishop well versed in the Bulgarian and Ottoman Turkish tongues. At first Philotheos refused the proposal, but later he acquiesced after receiving an assurance from Joachim that soon thereafter he would be appointed to a senior («γεροντική») metropolis. Thus, he was elected Bishop of Serres on August 7, 1875.

Metropolitan of Nicomedia and Service in the Holy Synod of Constantinople

After the death of Bishop Dionysios of Nicomedia on August 21, 1877, Philothoes was elected by the Holy Synod on August 24, 1877 as the Bishop of Nicomedia. The election took place at Halki, and Philotheos also had the support his benefactor George Zarifis.

Philotheos Bryennios, now Bishop of Nicomedia, remained in Constantinople as a member of the Holy Synod from October 1877 until October 1884, playing an important role in the first phase of Pronomia issue of the Ecumenical Patriarchate.[”note” 1]

In March 1880, together with the Bishop of Philadelphia Gerasimos, and the jurist Alexander Nahum, he was sent to Bucharest as representatives of the Orthodox Patriarchates of the East (Constantinople, Jerusalem, Alexandria and Antioch) and the Autocephalous churches, for discussions with the Romanian government concerning the fate of the plundered monastic estates which had been confiscated in 1862 by the Domnitor of Romania Alexandru Ioan Cuza.

In 1896, he travelled to Moscow along with then Bishop of Anchialos (later Bishop of Smyrna) Basileios, where he represented the Ecumenical Patriarchate at the coronation of Tsar Nicholas II.

Apart from the many terms that he served in the Holy Synod (1877-1884; 1894-1896; 1904-1910), he was also president of the Patriarchal Central Education Committee, and Commissioner of the Registry of the Theological School of Halki (Registrar).

In the debates that were conducted within the Ecumenical Patriarchate between supporters and opponents of Patriarch Joachim III, Philotheos was originally a fierce anti-Joachimist, but he changed attitude to Joachim III during his second patriarchy (1901-1912).

As Metropolitan of Nicomedia

With respect to his own Metropolis of Nicomedia, he carefully supervised the organization of the metropolis by establishing and rebuilding churches and schools, and by renovating from its foundations the Metropolis building, which was located within the enclosure which also encircled the Metropolitan Cathedral Church, in the vicinity of the coast of Astacus in Bithynia.

In the task of supporting educational institutions in the region of Nicomedia, Philotheus was greatly aided by George Zarifis. Thus, when Philotheos was elected Bishop of Nicomedia, Zarifis donated 600 Ottoman Liras for the construction of a school there.

In 1910 Philotheos resigned from the Metropolis of Nicomedia due to old age, having exhibited strong signs of visual impairment, like his predecessor, Constantine Typaldos. He retired to the Theological School of Halki, with the title Lifetime Honorary President of the Registry of the School (Registrar), but without ceasing his writing activities and dictating his thoughts in full clarity of spirit.

Bishop Philotheos died on November 18, 1917 at the age of 85 years, at the School of Halki, and was buried in the precinct of the School. Throughout his lifetime Bishop Philotheos was a man of letters and science, but also a great preacher.

Today his relics are kept in a plain grave behind the church of the School, with a marble cross, which he himself had built in his youth, while he was an employee of Christofis Paschalides.

He became known in the West by publishing two very important documents of Christian antiquity, based on a manuscript discovery he had made in 1873.

While in Constantinople, he discovered a manuscript in the Jerusalem Monastery of the Most Holy Sepulcher (in the Greek quarter of Constantinople), that contained: (1) a synopsis of the Old and New Testaments arranged by St. John Chrysostom, (2) the Epistle of Barnabas, (3) the First Epistle of Clement to the Corinthians, (4) the Second Epistle of Clement to the Corinthians, (5) the Teaching of the Twelve Apostles (Didachē), (6) the spurious letter of Mary of Cassoboli, and (7) twelve pseudo-Ignatian Epistles.[1]

The Letters were published in 1875,[note 6] and the Didachē in 1883,[2][note 7] both with valuable notes of his own. After its publication the Didachē triggered many research studies in Europe and America, and was released in several translations.

Reply to the Encyclical Letter of Pope Leo XIII

In 1882 Patriarch Joachim III and the Holy Synod of Constantinople assigned Bishop Philotheos the task of responding to the encyclical letter of Pope Leo XIII.[note 8]

Philotheos responded with a series of articles in the Journal of Ecumenical Patriarchate, Ecclesiastical Truth, which were later collected in a work entitled:

"Encyclical Letter of Pope Leo XIII reproved by Philotheos Bryennios, Metropolitan of Nicomedia, first published in "Ecclesiastical Truth", now revised and arranged in parts by the same and re-issued with the approval of the Holy Synod of the Great Church of Christ. In Constantinople, 1882."[note 9]

The prepared notes which he had used for the course which he taught on Church history at the Theological School of Halki have remained unpublished however.

Cite error: <ref> tags exist for a group named "”note”", but no corresponding <references group="”note”"/> tag was found, or a closing </ref> is missing