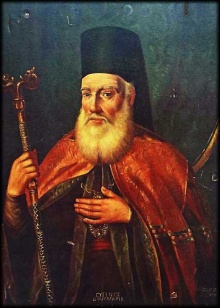 Eugenios Voulgaris (Greek: Ευγένιος Βούλγαρης, Russian: Евгений Булгарис, 1716–1806) was an eminent Greek Orthodox theologian and scholar, who spent the later part of his career in Russian Empire, where he served as the Archbishop of Cherson (in today's Ukraine). He was born in the Greek island of Corfu (then a possession of Republic of Venice) in 1716 as Eleftherios Voulgaris and died at the age of ninety at the court of Alexander I in St. Petersburg, Russia, in 1806.

His surname is sometimes also transcribed as Boulgaris.[1]

He copiously wrote treatises in theology, philosophy and the sciences and greatly influenced the development of modern Greek thought, while also contributing to the perception of Western thought throughout the Eastern Christian world. He was thus one of the greatest exponents of the Modern Greek Enlightenment.

Eugenios Voulgaris studied in Corfu under Vikentios Damodos, an important scholar of the period. He continued his studies in the School of Ioannina (a wealthy commercial town of western Greece) under Athanassios Psalidas.

After he became a monk-priest, in 1737 or 1738 with the name Eugenios, he went to Italy in order to study Theology, Philosophy, European Languages and Natural Sciences at the University of Padua.

Teacher of the Nation

In 1742, he became director of an important school of Ioannina, the Maroutsaia School. There he was involved in a public dispute with Balanos Vassilopoulos, who was the director of another high level school of the district regarding the curricula of their respective schools – Voulgaris arguing for the institution of natural philosophy.

From 1753 to 1759 Voulgaris was appointed director of the Athonite Academy (Athoniada Akademia) at Vatopedi Monastery aiming at upgrading the level of studies. There he taught philosophy as well as mathematics. Though he was considered to be one of the most eminent teachers, his strong adherence to the new ideas of the European Enlightenment caused the negative reaction of the religious hierarchy of Mount Athos, and he was forced to abandon the school in the beginning of 1759.

He then temporarily headed the Patriarchal Academy in Constantinople (known to Greeks as the "Great School of the Nation"). However in 1761 he permanently abandoned his educational career. Although he was associated by his opponents with the unsuccessful attempt to found a Western-style academy on Mt. Athos and at the Patriarchal Academy, nevertheless, he was also a strong opponent of Uniate and Roman Catholic expansion, and corresponded with Pierre Leclerc,[note 1] the French Catholic Jansenist pro-Orthodox Western theologian.

In a letter of his to the French Jansenist Leclerc, in which he speaks about the miracles, martyrs and other saints of the Orthodox Church from the time of the Schism up to his days, Voulgaris stresses that Orthodoxy has shown forth countless saints, equal to the ancients, and that throughout this whole period she possessed the bounty of miracles unceasingly, so that, as he says, "Our Church is continuously glorified and made wondrous by God, no less after the Schism than before it, and up to our times" (Epistle of Eugenios Voulgaris to Pierre Leclerc, first edition, by Andreas Koromelas [Athens, 1844], p.68).[2]

After his unsuccessful attempts to introduce the Enlightenment to the Athonite School and Patriarchal Academy he took shelter at the court of Russian Empress Catherine II, and spent the second half of his career in Russia. In 1763 he went to Leipzig and Berlin at the invitation of Empress Catherine II.

In 1771 he arrived in St. Petersburg, and between 1772 and 1774 he worked as as librarian at court of Catherine the Great. In 1775 he was ordained archbishop, and became the first Bishop of the newly created Eparchy (Diocese) of Slaviansk and Kherson. The new diocese included the lands of the Novorossiya Governorate and the Azov Governorate north of the Black Sea, a large portion of which had been recently conquered by Russia from the Ottoman Empire. Along with Russians and Ukrainians, Orthodox Greek settlers from elsewhere were invited to settle in the region, and the Imperial Government thought it appropriate to appoint a Greek-speaking bishop to preside over the new diocese.[3][4]

Despite its name, the diocese was actually headquartered neither in Sloviansk nor in Cherson, but in a more centrally located city of Poltava, where the Monastery of the Exaltation of the Cross[note 2] became the seat of the ruling bishop. The following year (1776), Eugenios invited another Corfiot, Nikephoros Theotokis, to join him in Poltava, and started training the younger Greek as his successor. In 1779, Eugenios retired, although he continued to live in the same monastery in Poltava, while Nikephoros took over the diocese.[3][4][5]

In 1787, Boulgaris was allowed to move to St. Petersburg. Since 1801 until the end of his life the retired bishop lived there in Alexander Nevsky Lavra. He died in 1806, and was buried in the Lavra's Church of St. Theodor (Fyodorovskaya Tserkov)[3]

Orthodoxy and the Enlightenment 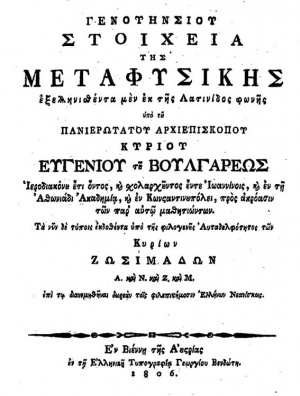 Title page of Elements of Metaphysics by Eugenios Voulgaris, published in Vienna, 1806.

Voulgaris was one of the most important Greek scholars and theologians of his time. Although he was strictly Orthodox, he tried to convey the ideas of this European Enlightenment to the Greek Orthodox cultural circles, through translations and teaching of the works of John Locke, Voltaire, and Christian Wolff. Voulgaris' model for the revivial and upgrading of learning within the Orthodox Church envisaged a substantial training in the classics combined with an exposure to modern European philosophy.[6]

The discussion on the Greek language question began at the end of the 18th century. Eugenios Voulgaris, along with Lambros Photiadis, Stephanos Kommitas (1770-1832) and Neophytos Doukas (1760-1845), were proponents of a more archaic high-level language (Ancient Greek), while Voulgaris's students Iosipos Moisiodax (1725–1800) and Dimitrios Katartzis (ca. 1725-1807) proposed a simpler (vernacular) language (Dimotiki). This discussion later became crucial when it was to be decided which form should be the official language of the modern Greek state, which was yet to be founded.

The humanist scholar Adamantios Korais (1748–1833) influenced the further discussion a lot. While being a supporter of the language of the people, Korais sought to cleanse it from elements that he considered to be too "vulgar" and eventually invented the purified and formal Katharevousa, which was set at a midpoint between Ancient Greek and the Modern Greek of the time.[7]

In his Treatise on Euthanasia (1804), Voulgaris tried to moderate the fear of death by exalting the power of faith and trust in the divine providence, and by presenting death as a universal necessity, a curative physician and a safe harbour. Voulgaris presented his views in the form of a consoling sermon, abundantly enriched with references to classical texts, the Bible and the Church Fathers, as well as to secular sources, including vital statistics from his contemporary England and France.

Besides euthanasia, he introduced terms such as dysthanasia, etoimothanasia and prothanasia. The Treatise on Euthanasia is one of the first books, if not the very first, devoted to euthanasia in modern European thought and a remarkable text for the study of very early European attitudes towards "good death". In the Treatise, euthanasia is clearly meant as a spiritual preparation and reconciliation with dying rather than a physician-related mercy killing, as the term progressed to mean during the 19th and the 20th centuries. This early text is worthy of study not only for the historian of medical ethics or of religious ethics, but for everybody who is trying to courageously confront death, either in private or in professional settings.[8]