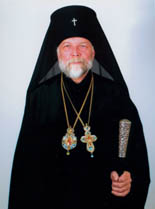 His Excellency the Most Reverend Archbishop Gabriel (de Vylder) of Komana was the primate and exarch of the Patriarchal Exarchate for Orthodox Parishes of Russian Tradition in Western Europe, a diocese under the jurisdiction of the Ecumenical Patriarchate. He served from 2003 to 2013 before his retirement.

Guido de Vylder was born in June 13, 1946 in Lokeren, near Ghent (Belgium), into a Flemish Catholic family. He received technical training as he was to succeed his father as head of the family business. After serving his military obligation in 1966, he entered the Institute for Delayed Vocations in Kortrijk. In 1970, he studied philosophy and theology at the Seminary of Ghent before changing his area of studies to morale and religious studies at Catholic University of Louvain from which he graduated in 1976.

During this time he became acquainted with the Orthodox Christian parishes in Belgium and the Netherlands which led him to refuse ordination to minor orders in the Roman Catholic Church. In January 1974, he was received into the communion of the Orthodox Church at the Parish of St. Andrew in Ghent.

In 1977, he was assigned as first priest of the parish of Saint Jean-Chrysostome in Maastricht, Netherlands. During this time he also participates in the establishment of parishes in Deventer, Breda, and Antwerp. On March 9, 1985, he was elevated to archpriest. On December 12, 1992, he was appointed rector of the parish of St. Alexander Nevsky in Liege, Belgium by Abp. Georges (Wagner).

On May 11, 1994, he took his monastic vows, with the name Gabriel, before Abp. Sergius of Eucarpie, at St. Sergius in Paris. On December 10, 1995, he was elevated to an abbot and on December 20, 1998 to archimandrite. On December 17, 1998, he was appointed rector of the parish of Maastricht, while retaining his duties in Liege.

In January 2001, the Holy Synod of the Ecumenical Patriarchate elected Fr. Guido auxiliary bishop of the Exarchate of Orthodox Parishes of Russian Origin in Western Europe with the title "Bishop of Komana". Consecrated bishop on June 24, 2001, he was given responsibility for the parishes in northern France, Belgium, the Netherlands, and Germany.

In December 2002, Abp. Sergius of Eucarpie became ill and assigned the task of administering the archdiocese to Bp. Gabriel. Following the death of Abp. Sergius on January 22, 2003, the Synod of the Archdiocese elected Bp. Gabriel Locum Tenens of the archdiocese. The clergy and laity of the General Assembly of the archdiocese, meeting in Paris on May 1, 2003, elected Bp. Gabriel to lead the archdiocese. His election was confirmed with the rank of Archbishop by Holy Synod of the Ecumenical Patriarchate on May 3, 2003. His enthronement took place in the Cathedral of St. Alexander Nevsky in Paris on June 1, 2004, attended by clergy and laity of Paris, the Paris region, the provinces, Belgium, the Netherlands, and Germany.

Abp. Gabriel was a member of the Assembly of Orthodox Bishops of France. He was also the rector of the Theological Institute of St. Sergius in Paris.

On January 8, 2013, Abp. Gabriel formally requested retirement of the Patriarch of Constantinople for health reasons. On January 15, Metr. Emmanuel, Greek Metropolitan of France, was appointed locum tenens pending the election of a new ruling bishop in May 1913. Abp. Gabriel retired to the city of Maastricht in The Netherlands.