Cathedral of Christ the Saviour (Moscow)

Cathedral of Christ the Saviour (Russian: Хра́м Христа́ Спаси́теля), located in Moscow on the bank of the Moscow River, is the largest church in Russia. The origin of the Cathedral began with the signing of a manifesto on December 25, 1812 by Tsar Alexander I declaring his intention of building a cathedral in honor of Christ the Savior, as the last of Napoleon’s forces retreated from Moscow. The present structure is a replica of the original cathedral built in the nineteenth century and destroyed on December 5, 1931. The Patriarch of Russia is the rector of the cathedral. 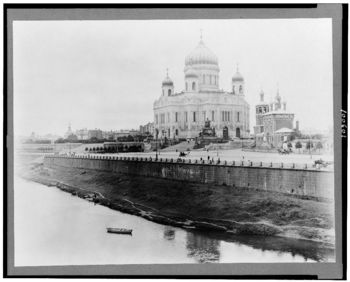 Cathedral of Christ the Saviour, Moscow

In the December 1812 manifesto, Tsar Alexander declared the cathedral would “…signify Our gratitude to Divine Providence for saving Russia from the doom that overshadowed Her and to preserve the memory of the unheard of efforts, loyalty, and love for our faith and homeland displayed during these difficult days by the Russian people…” While planning for the cathedral began as Napoleon and his army retreated from Russia its completion was decades later.

Under a plan by the architect Vitberg an initial start of the construction of cathedral began on October 12, 1817 with laying and blessing of the cornerstone. The site chosen was on Sparrow Hills between the Smolensk and Kaluga roads. The site, however, was found to be unstable and not suitable for the planned structure. As alternatives were considered Alexander was succeeded by his brother Nicholas I who had different architectural preferences. Konstantin A. Ton presented a second plan that placed the cathedral on a different site on the bank of the Moscow River that was occupied by the Aleksevevsky Convent and the Church of All Saints. The new plan was approved by Nicholas I on April 10, 1832.

After moving the convent to Sokolniki, construction of the Cathedral began on September 10, 1839 with the laying of the cornerstone. Construction of the huge structure continued for forty years. By 1841, the walls of the lower level were completed, followed by the joining of the arch of the main cupola in 1846. Covered by scaffolding, work continued on the exterior facing of the building and a start was made on construction of the metal roofs and lesser cupolas. The main cupola was completed in 1849. In 1860, the scaffolding was removed and the Cathedral was revealed for the first time in all its glory.

Construction continued on details of the structure while areas around the Cathedral, including riverbank terraces and squares, were completed. By 1881 the major construction was finished, including a bronze balustrade and exterior lanterns. Work on the interior frescoes continued for another twenty years. The Cathedral was formally named the Cathedral of Christ the Savior on December 13, 1880, when the priests and other clergy were also assigned to it for the first time. The Cathedral was consecrated on Ascension Day, May 26, 1883, the day that Tsar Alexander III was crowned. Chapels, located in the upper gallery, were dedicated to Ss. Nicholas and Alexander Nevsky, on June 12 and July 8, 1883 respectively.

The design of the cathedral followed that of ancient Russian churches that were built in the Byzantine style. It differed in having a more regular shape and was lighter in form. The cathedral contained a number of altars. The staff of the Cathedral was relatively small; the rector, an assistant rector, three priests, one protodeacon, two deacons, two subdeacons, four readers, two sextons, twelve bell-ringers, one baker (who made prosphora), and the choir. Among the leaders of the choir were the famous composers A. A. Arkhangelsky and P. G. Chesnokov.

After the assumption of governmental power by the Bolsheviks, the Cathedral was eventually closed. The site that it was on, as well as for ideological reasons, became an important factor in Bolshevik urban planning. Their plans entailed construction of a grandiose Palace of Soviets on the site topped with a statue of Vladimir Illich Ulyanov (Lenin) as a symbol of socialist victory and the leader of world proletariat. On December 5, 1931 destruction of the Cathedral began under direction of Joseph Vissarionovich Djugashvili (Stalin) . It was a year before the site was cleared.

The construction of the palace was hampered from the start by lack of funds, problems with the foundation soil, flooding from the nearby Moscow River, and then World War II. The hugh hole blighted the area for years until Nikita Khrushchev had the site converted into a hugh swimming pool during the 1950s.

The political thaw of the late 1980s brought on by a period of perestroika and the fall of the Soviet Union created an opening in which the Holy Synod of the Church of Russia, led by Patriarch Alexei II, requested the government of Russia and the City of Moscow for restoration of the destroyed Cathedral. Having been given approval in February 1990, the construction of the restored Cathedral began under Aleksey Denisov replicating the original design. Ordinary citizens contributed greatly to the construction fund that was started in 1994. After construction of the restored cathedral was well under way Denisov replaced by Zurab Tsereteli who made some controversial changes to the original design. 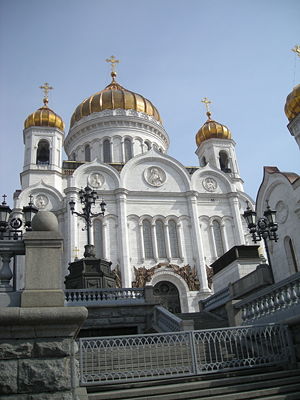 The new Cathedral of Christ the Saviour, Moscow

In 1996, the lower part of the building was completed and, in 1996, the church within it was consecrated to the Transfiguration of Our Lord. The completed Cathedral of Christ the Savior was consecrated on August 19, 2000. Monumental statues of the Tsars Alexander II and Nicholas II were placed near the Cathedral and several chapels were built on the cathedral square.

On May 17, 2007, in the assembly hall also located in the Cathedral, the ‘‘Act of Canonical Communion between the Moscow Patriarchate of the Russian Orthodox Church and Russian Orthodox Church Outside Russia’’ (ROCOR) was signed, restoring full communion with the Moscow Patriarchate. The reunion was celebrated by a Divine Liturgy concelebrated by Alexei II, Patriarch of Moscow and All Russia and Metr. Laurus, First Hierarch of ROCOR.