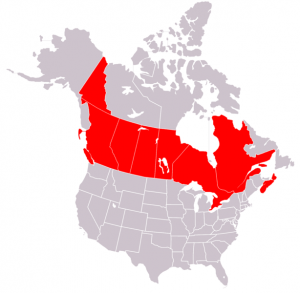 Visual representation of the Archdiocese of Canada

The Orthodox Church in America Archdiocese of Canada is an archdiocese of the Orthodox Church in America (OCA). Its territory includes parishes, monasteries, and missions located in eight provinces and territories in Canada—Alberta, British Columbia, Manitoba, Nova Scotia, Ontario, Quebec, Saskatchewan, and Yukon. The diocesan center is located in Spencerville, Ontario.

An auxiliary territorial See of the Diocese of the Aleutians and North America was established in Canada in 1916 with the installation of Bishop Alexander (Nemolovsky) as its bishop. In 1940, the See was elevated to that of a territorial diocese of the Russian Orthodox Greek Catholic Church of North America (Metropolia). In 1954, the diocese was elevated to that of an archdiocese. In 1970, the Metropolia was granted its autocephaly, with the name Orthodox Church in America, with Canada as an integral Archdiocese.

The current Archbishop of Ottawa and Canada is the Most Reverend Seraphim (Storheim). He was consecrated auxiliary bishop of Edmonton in 1987, and became ruling bishop of the archdiocese in 1990. He was elevated to the rank of archbishop in Spring of 2007.

Currently, His Grace, Bishop Irénée of Quebec City is functioning as the Administrator of the Archdiocese of Canada.

The current deaneries of the Archdiocese of Canada are: