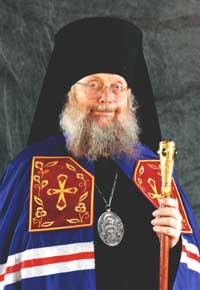 His Eminence, the Most Reverend Seraphim (Storheim) served as ruling bishop of the Archdiocese of Canada of the Orthodox Church in America from 1990 to 2010. Archbishop Seraphim was also secretary to the Holy Synod, Chair of the Church's Department of External Affairs, and the first Canadian to be consecrated to the episcopacy within the OCA. His tenure ended when he was placed on a leave of absence effective October 1, 2010. He was officially retired in March 2014. Later, in 2015, the retired Archbishop Seraphim was canonically deposed from the episcopacy and returned to the status of a lay monk, following accusations of misconduct.

In late September 2010 the Lesser Synod meeting in Oyster Bay Cove, NY, heard a report that Canadian police were investigating a complaint of sexual misconduct against Archbishop Seraphim. This act was alleged to have taken place thirty years prior when Archbishop Seraphim was a priest in Winnipeg. He was placed on a three-month leave of absence as the investigation continued and his episcopal responsibilities were being managed by Bishop Irenee.

During their annual fall session in Detroit, Michigan on October 19-23, 2015, the members of the Holy Synod of Bishops of the Orthodox Church in America canonically deposed the retired Archbishop Seraphim from the status and all sacred functions of the episcopacy, removed him from the ranks of the clergy, and returned him to the status of a lay monk.