Thomas (Joseph) of Charleston and Oakland

From OrthodoxWiki
(Redirected from Thomas (Joseph) of Oakland)
Jump to: navigation, search 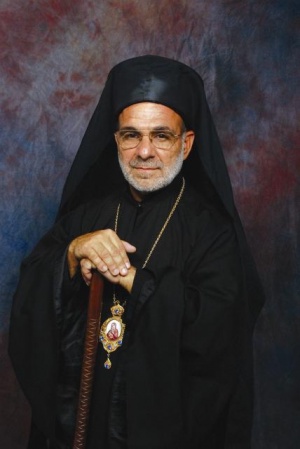 Of Arab-American heritage, Thomas Joseph was born in Paterson, New Jersey, in 1953. He attended John F. Kennedy High School in Paterson, graduating in 1970. He went on to college at William Paterson College, graduating in 1974. After college, he worked in the Department of Community Improvements in Paterson, then served as a teacher for the Paterson Board of Education. When the Antiochian Village camp opened in the late 1970s, he was recruited by Fr. John Namie to serve as one of the original camp counselors from 1979 to 1982.

In the fall of 1979, Thomas began part-time study at St. Vladimir's Orthodox Theological Seminary, and was made a subdeacon by Metropolitan Philip (Saliba) of New York in July of 1982. He continued his studies until the spring of 1983, when he was assigned to Virgin Mary Church in Yonkers, New York.

In 1984, Metr. Philip assigned him to St. George Church in Houston, Texas, where he served as Director of Christian Education and Youth Services. While in Texas, the Archdiocese also assigned him to oversee Christian Education and then later teen activities for the churches in the Southwest Region (now the Diocese of Wichita and Mid-America). In July of 1988 Thomas was ordained to the diaconate by Archbishop Michael (Shaheen) of Toledo.

On August 28, 1994, Bishop Antoun (Khouri) ordained Dcn. Thomas to the priesthood, and Fr. Thomas served as assistant pastor at his parish in Houston until August of 1996, when he was appointed pastor of St. Nicholas Antiochian Orthodox Christian Church in Pinellas Park, Florida (near St. Petersburg).

Between 1996 and his consecration to the episcopacy, Fr. Thomas served in multiple capacities aside from his work as a pastor. He was an appointed member of the Archdiocese Youth Department Board; Spiritual Advisor to the Teen SOYO (Society of Orthodox Youth Organization) Southeastern Region; Chairperson of the Tampa Bay Orthodox Clergy Association; Director of Programs in Pastoral Bioethics for the International Academy of Bioethics and Philosophy of Medicine in the United States; Speaker at Braunels, Germany, and at City University of Hong Kong on Bioethics; author of published articles on Christian Bioethics; Speaker at Antiochian Village and third session camp priest for many years; past President and Vice President of the Tampa Bay Council of Orthodox Churches. In July 2002, Fr. Thomas was granted a Master of Arts degree in Applied Orthodox Theology jointly from the Antiochian House of Studies and the St. John of Damascus School of Theology of the University of Balamand in Lebanon.

On February 15, 2004, Fr. Thomas was elevated to the rank of archimandrite by Bp. Antoun, and on December 5, 2004, he was consecrated to the episcopacy by Patriarch Ignatius IV (Hazim) of Antioch in Damascus, Syria.

Bp. Thomas was enthroned as Bishop of Oakland and the East at St. George Cathedral in Pittsburgh (Borough of Oakland), Pennsylvania, on May 6, 2005. In August of 2006, Bishop Thomas received a Doctorate in Education from California Coast University. His Grace also sits on the editorial board of Christian Bioethics.

In 2006, the Church of St. George in Charleston, West Virginia, purchased a chancery for the diocese, and in October of that year was elevated to a cathedral, thus adding another see to the diocese and renaming it to the Diocese of Charleston, Oakland and the Mid-Atlantic.

His Grace's residence is at the diocesan chancery in Charleston.