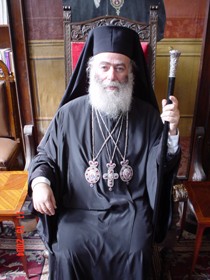 In 1990, he was consecrated bishop with the title of the formerly distinguished Diocese of Cyrene with the added appointment as representative of Patr. Parthenios in Athens. In this position he always accompanied Patr. Parthenios on his travels throughout Africa and to many international, interfaith, and Theological conferences.