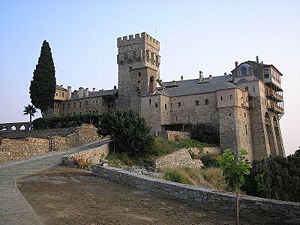 There are a number of legends concerning the founding of Stavronikita. A monastery was probably founded on the site of Stavronikita in the tenth century as the Haritona monastery according to one legend. According to another, two monks, Stavros and Nikitas, made their cells there, thus giving rise to the name ‘Stavronikitas'. About 1530, a monk, Gregory, purchased the cells of the early monastery from the Philotheou monastery. Over the next several years, abbot Gregory began rebuilding the monastery. With the help of Patriarch Jermiah I the katholikon was built between 1527 and 1536 and dedicated to St. Nicholas.

The monastery has experienced several major fires that caused serious damage. The earliest was in 1067. Other followed in 1607, 1817, 1864, and 1879. While the damages caused by the fires was repaired little maintenance could be done nor renovation and expansion could be undertaken as the monastery was constantly in debt until 1960 when the monks retired the monastery's debts.

The structure of the Stavronikita follows the traditional Athonite form with the katholikon situated in the center of the enclosed monastery space. Stavronikita has a pronounced shape of a fortress. The refectory is on the first floor of the southern wing. Six chapels are located both inside the monastery as well as outside. The frescos in the katholikon date from the sixteenth century and include work by the Cretan painter Theophanes and his son Simeon.

The monastery library contains 58 manuscripts on parchment from the eleventh to thirteenth centuries. There are two manuscripts on silk and 109 from the fourteenth to nineteenth centuries on paper in addition to several hundred printed books. Additionally, the monastery holds many other treasures including portable icons, crosses, relic of saints, and liturgical objects. A mosaic icon of St. Nicholas the Streda from the fourteenth century is a major treasure. The icon received its name ‘Stredas' (which is oyster in Greek) from the oyster on the forehead of the saint's image.

nb. only those with articles are listed here