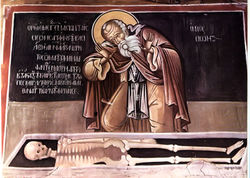 Saint Sisoës the Great before the tomb of Alexander the Great (16th c., Meteora Monastery), signifying the remembrance of death (Memento mori).[note 1]

Saint Sisoës the Great, also Sisoi the Great, Sisoy the Great, Sisoes of Sceté or Shishoy (†429 AD)[note 2] was a solitary monk, pursuing asceticism in the Egyptian desert in a cave sanctified by the prayerful labors of his predecessor, St Anthony the Great. For his sixty years of labor in the desert, St Sisoës attained to sublime spiritual purity and he was granted the gift of wonderworking, so that by his prayers he once restored a dead child back to life. His feast day is observed on July 6 / July 19.[note 3][note 4]

Saint Sisoës was an Egyptian by birth. Having withdrawn the world from his youth, he retired to the desert of Sceté, and lived some time under the direction of abbot Hor. The desire of finding a retreat yet more unfrequented induced him to cross the Nile and hide himself in the mountain where St. Antony died some time before.

Extremely strict with himself, Abba Sisoës was very merciful and compassionate to others, and he received everyone with love. The reputation of his sanctity became so illustrious as to merit the full confidence of all the neighbouring solitaries. Some even came a great distance to be guided in the interior ways of perfection; and, in spite of the pains he took he was forced to submit his love of silence and retreat, to the greater duty of charity.

To those who visited him, the saint first of all always taught humility, as the most necessary virtue. When one of the monks asked how he might attain to a constant remembrance of God, St Sisoës remarked, "That is no great thing, my son, but it is a great thing to regard yourself as inferior to everyone else. This leads to the acquisition of humility." Thus, while he never lost sight of the divine presence, it was ever accompanied with the consciousness of his own nothingness and misery. Asked by the monks whether one year is sufficient for repentance if a brother sins, Abba Sisoës said, "I trust in the mercy of God that if such a man repents with all his heart, then God will accept his repentance in three days."

He often passed two days without eating, and was so rapt in God that he forgot his food, so that it was necessary for his disciple Abraham to remind him that it was time to break his fast.

His prayer was so fervent that it often passed into ecstacy, his heart becoming inflamed with divine love.

It was a maxim with him, that a solitary ought not to choose the manual labour which is most pleasing to him. His ordinary work was making baskets. He was tempted one day as he was selling them, to anger; instantly he threw the baskets away and ran off. By efforts like these to command his temper he acquired a meekness which nothing could disturb.

His zeal against vice was without bitterness; and when his monks fell into faults, far from affecting astonishment or the language of reproach, he helped them to rise again with a tenderness truly paternal.

Some Arians had the impudence to come to his mount, and utter their heresy before his disciples. The saint, instead of an answer, desired one of the monks to read St. Athanasius’s treatise against Arianism, which at once stopped their mouths and confounded them. He then dismissed them with his usual good temper.

The saint said one time, “I am now thirty years praying daily that my Lord Jesus may preserve me from saying an idle word, and yet I am always relapsing.” Thus he was singularly observant of the times of retirement and silence, and kept his cell constantly locked to avoid interruption, and always gave his answers to those who asked his advice in the fewest words.

When St Sisoës lay upon his deathbed, the disciples surrounding the Elder saw that his face shone like the sun. They asked the dying man what he saw. Abba Sisoës replied that he saw St Anthony, the Prophets, and the Apostles. His face increased in brightness, and he spoke with someone. The monks asked, "With whom are you speaking, Father?" He said that angels had come for his soul, and he was entreating them to give him a little more time for repentance. The monks said, "You have no need for repentance, Father" St Sisoës said with great humility, "I do not think that I have even begun to repent."

After these words the face of the holy abba shone so brightly that the brethren were not able to look upon him. St Sisoës told them that he saw the Lord Himself. Then there was a flash like lightning, and a fragrant odor, and Abba Sisoës departed to the Heavenly Kingdom.

Troparion - Tone 1
Dweller of the desert and angel in the body,
you were shown to be a wonder-worker, our God-bearing Father Sisoës.
You received heavenly gifts through fasting, vigil, and prayer:
healing the sick and the souls of those drawn to you by faith.
Glory to Him who gave you strength!
Glory to Him who grant-ed you a crown!
Glory to Him who through you grants healing to all!


Kontakion - Tone 4
In asceticism you were revealed to be an earthly angel,
continually enlightening the thoughts of the faithful with divine signs.
Therefore we honor you with faith, venerable Sisoes.


Troparion - Tone 5
From your youth you followed the angelic life
And were therefore filled with many godly gifts.
O Sisoës, emulator of the angels,
In the hour of your going forth from this life,
You shone resplendently as the sun
Revealing your glory and illuminating our souls!