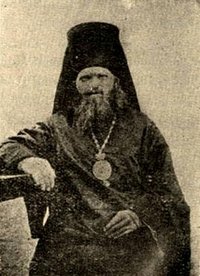 His Grace the Right Reverend Bishop Paul (Popov) of Novoarkhangelsk led the Novoarkhangelsk (Sitka) vicariate of the Diocese of Kamchatka during the troubled years following the sale of Alaska to the United States, from 1867 to 1870. He was faced with the departure of the Russian administrative organization and arrival of the American Protestants as well as the new governing apparatus.

Bishop Paul was born Peter Popov in Krasnoyarsk, Russia, in 1813, in the Yeniseysk province of Russia. His father was a priest. Peter Popov attended the Irkutsk Seminary, graduating in July 1834. On October 18, 1834, he was ordained a priest and assigned to the church in Nerchinsk. Then, in 1837 he was assigned to the cathedral in Krasnoyarsk, where on December 6, 1838, he was raised to the rank of archpriest.

On March 2, 1860, Fr. Popov received a monastic tonsure, was given the name Paul, and then elevated to the rank of archimandrite. On March 6, 1860, he was consecrated as the first bishop of the newly established auxiliary see of Yakutsk within the Diocese of Kamchatka, the Kurile and Aleutian Islands. Then, on November 9, 1866 he was transferred to the see of Novoarkhangelsk while remaining a vicar bishop of the Kamchatka diocese. Bp. Paul arrived in Alaska as it was being sold to the United States, and he was confronted with the transition from Russian to American rule. The incoming American sectarians were accompanied by the military, and life, particularly in New Archangel, became perilous. Sitka, as the New Archangel became known, was reduced to a population of only twenty families by 1877. With the multitude of changes that this transition caused, his rule was marked by great difficulties.

It was also during this period that Bp. Paul initiated a move that heralded the coming transfer of the see to San Francisco. For a period of time Bp. Paul had assigned Priest Nikolai Kovrigin to San Francisco to serve the spiritual needs of the Slavic population in the San Francisco area. Fr. Nikolai arrived in late March of 1868. He served his first Divine Liturgy on Pascha in a residence on Mission Street. Fr. Nikolai also noted in his report to Bp. Paul that the Gospel was read in four languages: Greek, Slavonic, English, and Russian. He also reported that the next day he served the Divine Liturgy in Greek for the Greeks in the city. Fr. Nikolai also advised that he also held services in Sacramento. Fr. Nikolai's last liturgy in San Francisco before returning to Alaska was on Sunday, May 19, 1868.

Bp. Paul was assigned ruling bishop of the Diocese of Yeniseysk and Krasnoyarsk on June 10, 1870. He departed Alaska, traveling across the United States on the way to Russia. As he was leaving Alaska he met his successor, Bishop John (Mitropolsky), who had arrived the day before he left. While he was in New York City he consecrated on November 12, 1870, the first Orthodox church there, Holy Trinity Greco-Russian Church organized by Father Nicholas Bjerring. On March 13, 1873, Bp. Paul was assigned ruling hierarch of the Diocese of Kamchatka, the Kurile Islands, and Blagoveshchensk. In this position he continued his labors in the missionary field where in addition to his missionary work in Siberia the missionary efforts of St. Nicholas of Japan were under his direction. On May 25, 1877, Bp. Paul reposed in the Lord in the city of Blagoveshchensk.