Monastery of the Vlatades (Thessalonica, Greece) 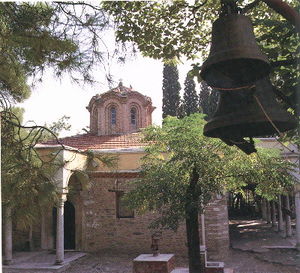 The monastery was founded as the Monastery of the Pantocrator by the brothers Dorotheus and Markus Vlatadon, who were students of Gregory Palamas, in the latter half of the fourteenth century. It was first mention in a letter by Patriarch Matthew dated in 1400 to Metropolitan Gabriel of Thessalonica.

The brothers founded the Monastery of the Pantocrator of the Vlatadon in 1351. Among the benefactors of the monastery was empress Anna Palaiologos, the widowed wife of emperor Andronikos III, who had retired to Thessalonica in 1351 and gave the monastery its royal status. The monastery attained a patriarchal and stavropegic status when a patriarchal sigillium was issued for it by Patriarch Neilus Kerameus during the 1380s.

In 1387, Thessalonica and the monastery were occupied for the first time by the Ottoman Turks. While the monastic community held together, the monastery properties were sequestrated as royal property and the main church was converted into a mosque with the frescoes of its interior plastered cover. During the Turkish occupation a unit of Turkish troops, commanded by a cavus, was billeted at the monastery giving rise to the name Cavus Monastir, still often popularly applied to the monastery.

Just prior to the treaty of 1403, during which the Turks canceled the sequestration of the Monastery of Vlatadon, a document from Patr. Matthew of Constantinople noted that the priest Theodotos was the abbot of the monastic house of St. Athanasius, which was a dependency of the Monastery of the Pantocrator, reflecting the proclamation of the status of Vlatadon as patriarchal and stavropegic and no longer exclusively as royal.

In 1403, the Turks departed, to return for the second occupation in 1430. During this occupation the monastery was not molested and continued to function as theTurks honored its status as patriarchal and stavropegic and thus not subject to sequestration. The Vlatadon monastery, however, did received the relics of St. Gregory Palamas for safekeeping as the Turks acquired the Church of Hagia Sophia in Thessalonica and converted it into a mosque.

During the latter part of the sixteenth and most of the seventeenth centuries the condition of the Monastery of Vlatadon and its dependencies deteriorated. While supported by a succession of Patriarchs of Constantinople, the monks of the Monastery of Vlatadon attempted to recover and restructure their dependencies in Thessalonica. This effort was hampered in part by the loss of monastery's independence in the 1630s for fifteen years when it became a dependency of the Monastery of Ivrion of Mount Athos. During the period from 1714 to 1836 eight abbots were in charge of the Monastery. Of these abbots Ignatios Konstantinou held the office for thirty-nine years, from 1755 to 1814. He was very active to the benefit of the Monastery. It was during his time that the buildings of the Monastery were renovated, especially the Katholikon. Also during this period saw the introduction of the system of lay wardens who assisted the abbots in the performance of their duties. For the thirty years period from 1836 to1866, two-man committees of monks were used to administer the Monastery. But, since the monks often failed in their administrative duties of running the monastery properly, the Ecumenical Patriarch took the initiative of assigning these duties to lay wardens, prominent among whom was Athanasios Papageorgiou.

In an attempt to restore canonical order, the Ecumenical Patriarch later brought back the institution of the abbacy. However, towards the end of the period of office of the first abbot, Nikeforos Demetriades, who served from 1866 to 1870, the dependency church of St. Athanasius was taken over by the people who lived in its neighborhood. A succession abbots were unable to secure its release. Then, during the time of his successor, Kallinikos Theologides, from 1871 to 1892, the income from the land holdings of the monastery was awarded by the Patriarchate to the Theological School in Halki. This began a new period of poverty for the monastery.

It was during the tenure of Abbot Kallinikos Georgiades, from 1892 to 1923, that the environment at the monastery changed. Initially, Abbot Kallinikos began rough repairs of the decaying building complex, but the liberation of Thessalonica in 1912, and its incorporation into the nation of Greece, changed the political atmosphere allowing serious renovation. During his tenure as abbot from 1923 to 1940, Ioakeim of Iviron began a construction program that included a new building for the abbot's residence, as well as a sacristy, a chapel dedicated to the Mother of God, and other new buildings, the expenses of which met by Professor Anastasios Mysiroglou. However, as the political changes brought changes in populations, the monastery lost its lands in Kalamaria which were expropriated to be given to the landless and for other social purposes.

By the mid-twentieth century the monastery became a meeting place for scholars and academics of the city. In 1965, the Patriarchal Institute for Patristic Studies was established that has worked closely with the Aristotelean University of Thessalonica. In recent years the Monastery of the Vlatades has been further renovated and expanded.