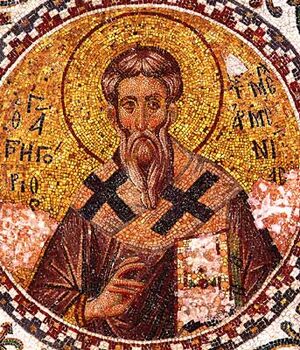 Our father among the saints Gregory the Enlightener also Gregory the Illuminator (Armenian: Գրիգոր Լուսաւորիչ translit. Grigor Lusavorich, Greek: Γρηγόριος Φωστήρ or Φωτιστής, Gregorios Phoster or Photistes), Equal of the Apostles and Enlightener of Armenia, was the religious leader credited with forging the Christian identity of Armenia by converting them from pagan beliefs. Armenia became the first country to establish itself as a Christian nation, an event traditionally dated to 301, now believed by most scholars to have occurred somewhat later, though before 314. This great missionary saint is commemorated on September 30.

Gregory was born about 257. His father Anak, a Parthian prince, was put to death for assassinating his kinsman King Khosrov while Gregory was still an infant. To escape execution, Gregory was taken by his nurse to Caesarea in Cappadocia where he was raised as a Christian. He married and had two sons. One son, Orthanes, would later become a priest and the other, Aristaces became, first, an monk, then later a bishop who attended the Council in Nicea. About 280, Gregory returned to Armenia and entered the service of King Tiridates III, the son of the assassinated Khosrov. However, Tiridates was intolerant of Christianity and demanded that Gregory renounce his Christian faith which he refused to do. Gregory was imprisoned and subjected to many tortures during his imprisonment of some thirteen years including enduring imprisonment in a pit with venomous snakes. In the meanwhile Tiridates continued to pursue his anti-Christian campaign. He executed St. Rhipsime, the abbess Gaiana, and 35 virgins of a monastery in Asia Minor. During these times, Tiridates developed a serious ailment and suffered disfiguration. However, his heart soften after he was cured through Gregory’s prayers.

In 297, Tiridates, in gratitude, released Gregory from his tortures, who then began to preach to the people, urging them to reject the worship of idols and to follow Christ. Soon, Tiridates, repenting his crimes and, with most of the people of Armenia, answered Gregory’s call and became converts to Christianity. Tiridates was baptized by Gregory in 301. In that year, Tiridates adopted Christianity as the religion of his country. With the conversion of Armenia, the temples to idols were destroyed and churches to God were built.

In 302, Gregory was consecrated bishop of all the Armenians, to be their Catholicos, by Leontius of Caesarea. In 303, Gregory built the Cathedral of Etchmiadzin near Mount Ararat which still is the seat of the Amenian Catholicos. In 318, Gregory named his son, Aristaces, as his successor and charged his grandson, Grigoris, to spread the Gospel of Christ throughout the Caucasus and Anatolia. Gregory then retired to a monastery near Mount Sebuh in the Daralia province of Upper Armenia where he reposed about 331.

By sharing in the ways of the Apostles, you became a successor to their throne. Through the practice of virtue, you found the way to divine contemplation, O inspired one of God; by teaching the word of truth without error, you defended the Faith, even to the shedding of your blood. Hieromartyr Gregory entreat Christ God to save our souls.

Today, let us the faithful, praise with songs and hymns the admirable hierarch Gregory as an initiate in the sacred mysteries. He was a contender for the truth, a vigilant pastor and teacher, a light for the whole world, interceding with Christ that our souls may be saved!