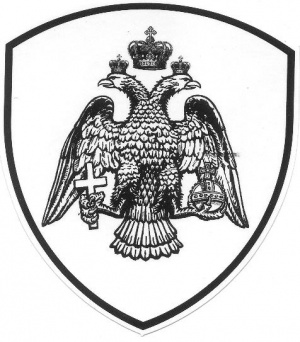 The double-headed eagle is the most recognizable symbol of Orthodoxy today (other than the cross) and was the official state symbol of the late Byzantine Empire, symbolising the unity between the Byzantine Orthodox Church and State, which was governed by the principle of Symphonia or Synallelia, that is, a "symphony" between the civil and the ecclesiastical functions of Christian society.

In addition, the heads of the eagle also represent the dual sovereignity of the Byzantine Emperor, with the left head representing Rome (the West) and the right head representing Constantinople (the East). The claws of the eagle hold a cross and an orb (this combination is on the official flag of the Ecumenical Patriarchate today), or in some similar depictions with a sword and an orb.

Emperor Isaacius Comnenus (11th century AD), the first ruling member of the Comnenus dynasty, was the first Emperor who adopted the two headed eagle as the symbol of the Empire.

The yellow with a black crowned double-headed eagle flag, was the symbol of the Paleologues, the last Greek-speaking "Roman" (i.e. Byzantine) dynasty to rule from Constantinople. Emperor Michael VIII Paliologos recaptured Constantinople from the Crusaders in 1261, from a state based in Asia Minor; the double-headed eagle symbolized the dynasty's interests in both Asia and Europe, and was kept despite the fact that virtually all of the Asian possessions were gobbled up by the Ottomans within a generation of the recapture of the City. Michael's descendants stayed on the Byzantine throne until the City and the Empire fell to the Ottomans in 1453.

This flag had in the two centuries of Paleologan rule become identified not just with the dynasty but with the Empire itself and, more generally, with institutions and cultural ideas outside the Byzantine Empire that still remained centered on Constantinople.

Orthodox provenance of the double-headed eagle

The following gallery shows heraldic usages of the double-headed eagle in the history of the Orthodox Church, including:

Emblem of Church of Constantinople and Mount Athos

The modern double-headed eagle flag for the Ecumenical Patriarchate of Constantinople and of Mount Athos, features the eagle with a cross in the right claw symbolizing spiritual authority, and an orb in the left symbolizing secular authority. Above the eagle, is a crown, and the background colour of the flag is yellow or gold. (see image above). This flag is often used also by the Greek Orthodox Churches in the diaspora under the Patriarchate as their official flag (such as in America, Canada, Australia, etc), and is not to be confused with the double-headed eagle used by the Church of Greece. Having said that, many monasteries and churches in Greece do currently fly this golden/yellow flag, for historical reasons.

The two major symbolic elements of Russian state and church symbols (the two-headed eagle and St. George slaying the dragon) predate Peter the Great. The double-headed eagle was adopted by Ivan III after his marriage with the Byzantine princess Sophia Paleologo, whose uncle Constantine was the last Byzantine Emperor. After the Fall of Constantinople to the Turks in 1453, Ivan III and his heirs considered Moscow to be the last stronghold of the Christian faith, and in effect, the last Roman Empire (hence the expression "Third Rome" for Moscow and - by extension - for the whole of Imperial Russia).

From 1497, on the double-headed eagle proclaimed a Russian sovereignty equal to that of the Holy Roman Empire of the German Nation. The first remained evidence of the double-headed eagle officialised as an emblem of Russia is on the great prince's seal, stamped in 1497 on a Charter of share and allotment of independent princes' possessions. At the same time the image of gilded double-headed eagle on red background appeared on the walls of the Palace of Facets in the Kremlin.

Diffusion from Byzantium to various usages

The two-headed Byzantine Eagle is currently the emblem on the Flags of the Patriarchate of Constantinople and of Mount Athos, as well as those of Serbia, Albania and Montenegro. It has also become the Coat of Arms of modern States including Serbia, Russia, Albania, and most recently Montenegro.

The historic spread of its use occurred because the nations that officially adopted Orthodox Christianity - the religion of the Eastern Roman Empire (ΡΩΜΑΝΙΑ/Romania) - as their state religion, had the right to bear the byzantine eagle on their arms if they wanted to, with the corollary that the bearing of the byzantine eagle in gold was a priviledge that only belonged to the sovereign of Constantinople.[1] (See for example, the image of the Imperial Palaeologan eagle, above).

Therefore, the Serbian eagle is depicted in silver. Russia also had the eagle in silver but they changed it to gold (probably in the 15th century after the marriage of Ivan III, Grand Duke of Moscow with Sophia Palaeologina, the daughter of the last Byzantine Emperor & after the fall of Constantinople to the Ottomans), to justify their claim as the "third Rome". Austria on the other hand, earned the right to bear the byzantine eagle, after the marriage of the first German Emperor Otto I in 972, with the niece of Byzantine Emperor Ioannis Tzimiskes, Theophano (and of course the Austrian Empire claimed to be the continuation of the Holy Roman Empire of the Germans). They adopted the byzantine eagle, in black though, as the "shadow of the Imperial Eagle".[2].

Use on coats of arms

The two-headed eagle appears on the coat of arms of the following countries[3]:

Flags with the Double-headed eagle

After the Russian-Tlingit Battle of Sitka in 1804, peace talks were conducted, and Aleksandr Baranov, the first governor of colonial Russian Alaska and manager of the Russian-America Company, presented the Kiks.adi Sitka Tlingit leaders with a large medallion, on which was found the Russian imperial symbol. Since that time, the double-headed eagle has been a motif widely used in Tlingit art.