Church of Saints Peter and Paul of the Greeks (Naples, Italy) 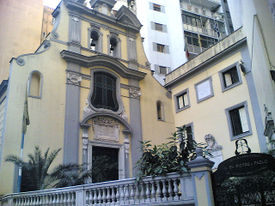 Facade of the Church of Saints Peter and Paul, Naples, Italy.

The Greek Orthodox Church of Saints Peter and Paul in Naples, Italy ((Greek)

Ἱερός Ναός Ἁγίων Ἀποστόλων Πέτρου καί Παύλου)[note 1] is a parish of the Archdiocese of Italy and Malta, in the Archdiocesan District of Campania, that was founded in 1518 to serve the needs of Greek Orthodox faithful who became refugees after the Fall of Constantinople in the 15th century. It was originally dedicated to the Twelve Apostles. The church is located in the historic center of the city of Naples, on Via S. Tommaso Aquino N.51.

Naples is one of the oldest continuously-inhabited cities in the world. Bronze Age Greek settlements were established in the region in the 2nd millennium BC,[1] with a larger mainland colony – initially known as Parthenope (Παρθενόπη) – developing around the 9th–8th centuries BC, at the end of the Greek Dark Ages.[2][3][4] The city was refounded as Neápolis (Νεάπολις, meaning "new city") in the 6th century BC[5] and became a lynchpin of Magna Graecia, playing a key role in the merging of Greek culture into Roman society and eventually becoming a cultural centre of the Roman Republic.[6] When Naples and Greece itself were a part of the Roman Empire, Greek remained a widely spoken language in Naples.[7]

When the West fell to the Goths, Naples fell with it, but was quickly retaken by the Byzantine Empire. Under Emperor Justinian's brief unification of the Eastern and Western Empires, Greek once again became the language of Naples about a thousand years after it had first reached these shores, becoming the official language of commerce, politics and religion.[7] Byzantine power surged and ebbed in Southern Italy in the sixth, seventh and eighth centuries, but Greek influence in Naples remained strong. Even after Charlemagne refounded the Western Empire, southern Italy was not a part of it. In spite of the growing hostility between the Eastern and Western branches of Christianity, there were Eastern Churches and monasteries all over the south, including Naples. After the Great Schism, Orthodox Rites were still commonly held in and around Naples, and there was even a Greek monastery in use there until the Counter-Reformation in the 17th century.[7]

During the sixteenth century, the Greek community of Naples and in other areas of Southern Italy gradually expanded as a result of the Ottoman Turkish advances in the Balkans. In 1534, Emperor Charles V allowed the establishment of large groups of expatriates from Patras, Koroni[note 2] and Methoni, who were forced to flee to Campania after the temporary Spanish occupation of the southwestern Peloponnese (1532-1534).[8] This Greek community was reinforced by new arrivals from the Peloponnese, western Central Greece, and Epirus, after the Venetian-Ottoman war of 1537-41, and especially after the Battle of Lepanto (1571), when those who were involved in rebellions against the Ottomans fled to Italy (i.e. from the areas of the Mani Peninsula, Achaea, Central Greece, Himarra, and the Ionian Islands).[8]

Church of Saints Peter and Paul of the Greeks 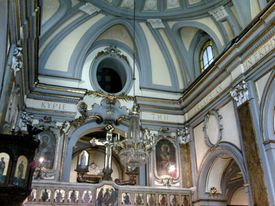 Interior of the Church.

In 1518 a Byzantine prince named Thomas Asen Palaiologos (Tommaso Assanios Paleologos)[note 3] sponsored the construction of the Greek Church in the central district of Naples, being dedicated to the Twelve Apostles.[8][9][note 4] In addition to this, he also founded a chapel within the Roman Catholic church of San Giovanni Maggiore, Naples.[8] It was only in 1544 however that the Church of the Twelve Apostles was consigned to the Greeks and adapted to the Orthodox Rite.[10][11]

In 1617, after having fallen into terrible condition, the church was completely redone, including the addition of an academy for Greek girls.[11][12]

Today the visible structure is fruit of further work completed in 1757.[11]

The text of the Greek rite was codified in 1760 by a decree of the Bourbon Kingdom of the Two Sicilies, and the status of the church, as defined by the Bourbons, was accepted by the new Italian State after the Unification of Italy in the 19th century.[7]

The church itself is small and intensely spiritual. The silver icons have an overpowering presence and are close enough to touch.[7] Today only a few fragmentary traces remain of the fresco cycle of Belisario Corenzio (ca.1558–1643), an Italian Mannerist painter who was Greek by birth. The church houses fifty post-Byzantine icons, forty of which are the work of Eustachio Caruso, a native of Cephalonia (1766-91). 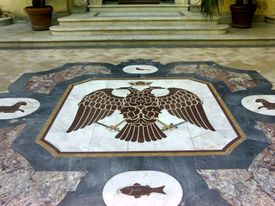 Floorspace in the Outer Courtyard, with the Double-Headed Eagle insignia.

It is a fact that from the late 16th century up until the 19th century, the Greek community suffered from conflicts with the Uniates, who were aspirants to the rich revenues of the Greek Church and the favour of the local ecclesiastical authorities. The community was able to resist these difficulties mainly because it was organized into a Brotherhood ((Italian)

Members of this Greek community played an active role in the preparation of various independence movements in the southern Balkans, especially in the first half of the 17th century. Distinguised members of the community included artists, such as painter Belisario Corenzio; scholars and clerics, such as Makarios and Nicephoros Melissenos,[13] and Constantine Lascaris; as well as military personnel such as Andreas Kontostavlos, the Rosseti brothers, Paleologans, Litardos, Jeremias Kombis, Ioannis Mouzakis,[14] the Maispezos brothers, Dimitrios Lekkas, George Corraface, and others.[8]

Today, the members of the confraternity vote by secret ballot on how to distribute income from offerings and the few properties that the Church owns in Naples. Monies are used for philanthropic and educational purposes, as well as to pay those who work for the church. Such income has helped to create an elementary school for Greek children and children of mixed marriages. There is also an auditorium for social gatherings.[7]