Diocese of Mtskheta and Tbilisi

Christianity came to Georgia in the early fourth century through the missionary work of Nino of Cappadocia and was proclaimed the official religion of Eastern Georgia by St. King Mirian of Iberia (remembered October 1). At the time, the churches in Georgia were part of the Apostolic See of Antioch with a diocese established at Mtskheta. Mtskheta became recognized as the spiritual center of Christian Georgia, being recorded in Georgian and foreign manuscripts as the "Apostolic Church of Mtskheta", the "Throne of Mtskheta", and "Patriarchate of Mtskheta". Thus, the bishop of Mtskheta became recognized as the Primate of the Church of Georgia. 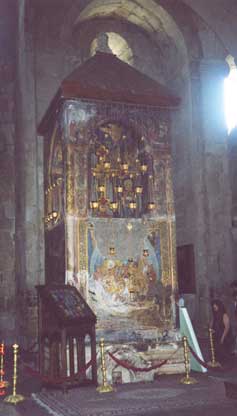 During the reign of St. King Vakhtang (commemorated November 30) twelve dioceses were founded in Kartli, and the Church of Georgia was also recognized as autocephalous by the Constantinople. During the fourth and fifth centuries the capital of Georgia was Mtskheta; Tbilisi was only a castle. After death of King Vakhtang, his successor, Dachi began building a city at Tbilisi. The first church built in Tbilisi was Sioni which later became the cathedral of the bishop of Tbilisi. 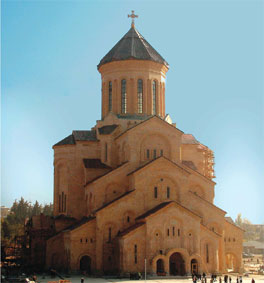 The central dioceses of Georgia, Mtskheta and Tbilisi, despite being close to each other, functioned separately. As Tbilisi became the capital of kingdom the authority of the bishop of Tbilisi increased, but his see did not have any historical privileges. Additionally, during these times enemy forces were attacking the capital, Tbilisi. The wars dispersed the diocese as the inhabitants fled the city. Ultimately, Tbilisi came under Arabic rule for four centuries, from the seventh through the eleventh centuries. Even in the thirteenth century, according to Gangeba darbazobisa (Rules of Conventing), the Bishop of Tbilisi is recorded in the 29th place on the inter-ecclesiastical diptych.

At the end of seventeenth century Catholicos-Patriarch Ioane gave the title of Metropolitan to the Bishop of Tbilisi. Then, in 1794, King Erekle II of Kartli and Kakheti not only agreed with this decision but he returned the previous honor to Bishop of Tbilisi. In the decree the King said: the "Bishop of Tbilisi had a higher place in Church at councils... even when it was not capital, but Kutaisi... and he had privileges". The hierarchs of Tbilisi continued to use the title and privileges until the unions of Georgia with Russia and the Church of Georgia with the Church of Russia. At that time the two dioceses of Mtskheta and Tbilisi were joined under the omophor of the Exarch of Georgia.

The Diocese of Mtskheta and Tbilisi includes Tbilisi, which is the capital city of Georgia and the city and district of Mtskheta, except Tsilkani. There are three Patriarchal cathedrae in the diocese, Svetitskhoveli in Mtskheta, Sioni (Zion) and Sameba (Trinity) in Tbilisi.

There are 109 active churches in the diocese, and twelve monasteries of which seven are for males and five for females. The Tbilisi Theological Academy and Seminary is also located within the diocese.