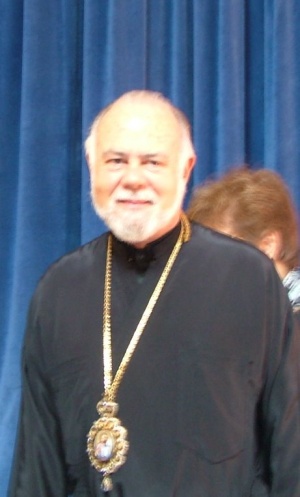 His Grace Dimitrios, Bishop of Xanthos
His Grace Dimitrios (Couchell) of Xanthos is a titular bishop of the Ecumenical Patriarchate serving in the United States. Prior to his retirement, he served in a variety of roles, most recently as General Secretary of the Standing Conference of the Canonical Orthodox Bishops in the Americas (SCOBA). He is a veteran of many inter-Orthodox endeavors in America.

Dimitrios was born James George Couchell in Greenville, South Carolina, on February 17, 1938. He began his primary education in Spartanburg, South Carolina, then continued most of his primary and secondary education in Schenectady, New York. He completed high school in Spartanburg, and after one year at Northwestern University, he transferred to the Holy Cross School of Theology, graduating in 1963 with a BA in Theology. Following a year of postgraduate study at Yale Divinity School in New Haven, Connecticut, he worked at the headquarters of the Greek Orthodox Archdiocese of North and South America for the next 17 years in a variety of capacities.

During his years at the archdiocese, Couchell developed the Orthodox Campus Ministry program under the auspices of SCOBA and served as executive director. Part of this ministry included the publication of the quarterly magazine "Concern" for Orthodox college students. In seven years, Couchell visited more than 1,000 college campuses throughout the United States and initiated links with the National Student Christian Federation; the World Student Christian Federation; and SYNDESMOS, the World Fellowship of Orthodox Youth. At that time, there were more than 100 chapters of the Orthodox Christian Fellowship on American campuses, and an annual National Conference was convened for Orthodox college students.

In 1971 he was appointed as the first English Editor of the new bi-weekly newspaper of the archdiocese, the Orthodox Observer. He served in that role until 1981. From 1977-1980, he served as President of SYNDESMOS.

In 1981, Couchell was appointed by the Archbishop of America, Iakovos, as the executive director of the new St. Photios Greek Orthodox National Shrine in St. Augustine, Florida. On March 20, 1983, James Couchell was ordained a deacon by Bishop John of Atlanta. It was at this time that he took the name Dimitrios. Deacon Dimitrios was ordained to the Holy Priesthood by Archbishop Iakovos on Pentecost Sunday, June 26, 1983, in St. Augustine. The date was significant: it marked the 215th anniversary of the landing in St. Augustine of the first Greek colony on the North American continent. On the occasion of the consecration of the shrine's Chapel of St. Photios, Archbishop Iakovos elevated Fr. Dimitrios to the rank of archimandrite.

In January of 1985, Fr. Dimitrios was appointed to serve concurrently as the executive director of the newly founded Archdiocesan Mission Center, which initially was based at the St. Photios Shrine. Fr. Dimitrios oversaw the construction of a new facility for the mission center and initiated key programs, including the sending forth of the first Orthodox mission teams to Africa.

On May 18, 1998, the Holy Synod of the Ecumenical Patriarchate of Constantinople unanimously elected Fr. Dimitrios as an auxiliary bishop to Archbishop Spyridon of America with the title Bishop of Xanthos. The new bishop was consecrated to the episcopacy on May 31, 1998, at the Greek Orthodox Cathedral of St. George in Philadelphia by Archbishop Spyridon, Metropolitan Paisios of Tyana, Bishop Philotheos of Meloa, and Bishop Vikentios of Apameia.

Bishop Dimitrios relocated to New York and was appointed as Ecumenical Officer of the Greek Orthodox Archdiocese of America, as well as General Secretary of SCOBA. In this latter role, he exercised oversight of various SCOBA initiatives such as the Orthodox Christian Mission Center (OCMC) and International Orthodox Christian Charities (IOCC). He also initiated the annual vespers service held in New York for the staff and delegates of the United Nations, jointly sponsored by SCOBA and the Standing Conference of Oriental Orthodox Church Hierarchs. He also served for several years as Acting Chief Secretary of the Holy Eparchial Synod of the Greek Orthodox Archdiocese of America.

Among the other posts held by Bishop Dimitrios have been

Bishop Dimitrios retired from active service at the end of 2006, although he remains a special consultant to the Archdiocesan Department of Inter-Orthodox and Ecumenical Affairs. He currently resides in St. Augustine, Florida.