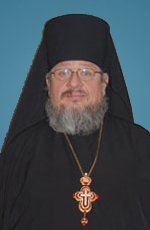 Archimandrite Alexander (Pihach) is a priest of the Orthodox Church in America appointed in 2012 as Dean of St. Catherine the Great Martyr Church in Moscow, Russia, the representation church of the OCA to the Church of Russia.

Dennis Alexander Pihach was born in Saskatoon, Saskatchewan, Canada on June 27, 1952 in an Orthodox Christian family with two brothers. Dennis entered St. Andrew’s College in Winnipeg, Manatoba, Canada from which he graduated in 1973 before continuing his education in Sociology and Slavic Studies and graduated from the University of Saskatchewan. After his graduation he entered in employment with Social Services.

In 1986, Dennis was ordained to the priesthood in the Archdiocese of Canada of the Orthodox Church in America and assigned to plant a mission in Yorkton, Saskatchewan while continuing his employment with Youth Addictions Services. The mission is now the Church of St. Mark. In 1996, Father Dennis was elected Dean of the Manitoba-Saskatchewan Deanery and appointed Chancellor of the Archdiocese of Canada. Two years later, he was assigned Rector of St. Herman of Alaska Sobor in Edmonton, Alberta.

On July 11, 2009, Father Dennis was tonsured to monastic orders with the name Alexander and elevated to the dignity of Igumen of St. Elias Skete in Dickie Bush, Alberta. On September 1, 2009, Father Alexander was appointed Interim Dean of Annunciation Cathedral in Ottawa, Ontario. In May 2011, he was elevated to the dignity of Archimandrite and returned to St. Herman Sobor on a full time basis. On October 16, 2012, Archim. Alexander took on the duties of acting Dean of the Church of St. Catherine the Great Martyr In-the-Fields in Moscow, Russia.