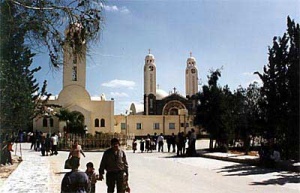 Abu Mena is a UNESCO World Heritage Site, and was once an important Christian pilgrimage site during the 4th to 7th cent. A.D. Numerous little clay bottles (ampullae), on which Saint Mina's name and picture are engraved, were discovered by archeologists in diverse countries around the world, such as Heidelberg, Germany; Milan, Italy; Dalmatia, Croatia; Marseille, France; Dengla, Sudan; and Jerusalem. These pottery ampullae (small holy water and oil flasks brought from pilgrimage places as a souvenir, and mass-produced in Early Byzantine times) come from Abu Mena, near Alexandria in Egypt.