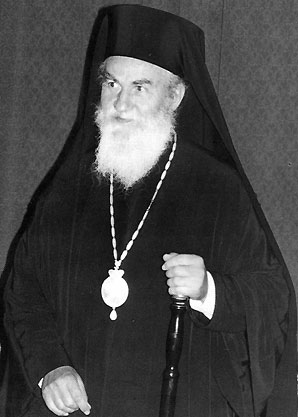 Sotirios Oikonomidis was born on June 20, 1922 in Kalogriana, Karditsa in central Greece. He attended elementary and Farsala school in Kalogriana before studying at the Seminary of Corinth. After the seminary closed he continued his education at the high school of Karditsa from which he graduated in 1941. He continued his education at the School of Theology of the University of Athens, graduating in 1949. Following his graduation Sotirios performed his 28-month period of military service at the Military Theological Office.

Completing his military service in 1952, he became a member of the semi-monastic Orthodox Brotherhood of Theologians Zoe and then in 1960 as a member of the Theologian Circle Soter (Savior). Initially, he served as a secular preacher at the region of Messinia, before he became a monk in the Monastery of Asomaton Petraki in Athens. At his tonsure he was given the name of Sevastianos.

In August 1956, Sevastianos was ordained a deacon by Metropolitan Dionysios of Lemnos (later of Trikkis and Stages). In April 1957, he was appointed a preacher of the Metropolis of Ioannina. As a preacher at the Metropolis of Ioannina during the decade from 1957 to 1967, Fr. Sevastianos worked with Metropolitans Demetrios and Seraphim who was a former Archbishop of Athens. On June 26, 1957, he was ordained a priest and raised to the dignity of archimandrite by Metr. Demetrios of Ioannina, He also taught at the Seminary of the Monastery of Vellas as well as at the Zosimaia Pedagogical School in Ioannina.

In June 1967, Archim. Sevastianos is elected metropolitan of the Metropolis of Dryinoupolis, Pogoniani, and Konitsa. As metropolitan of one of the smaller metropolises of Greece, he became widely known both in Greece and worldwide for his fighting spirit in claiming the rights of Northern Epirus’ Hellenism.