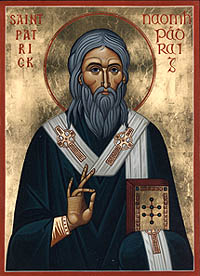 Our father among the saints Patrick of Ireland, Bishop of Armagh and Enlightener of Ireland, was born a Briton. Captured and brought to Ireland as a slave, he escaped and returned home. Later, he returned to Ireland as a missionary, bringing Christianity to its people. His feast day is March 17 (OS) / March 30 (NS).

Saint Patrick was born around 390 (likely in 387), at Kilpatrick, near Dumbarton, in Scotland. His name is from the Latin Patricius, meaning high-born. His parents were part of the Christian minority of Britain; his father, Calpurnius, was a deacon, "the son of Potitus, a priest, of the village Bannavem Taburniæ."

At the age of 16, he was captured during a raiding party and taken to Ireland as a slave to herd and tend sheep. During that time, he prayed frequently and came for the first time to have a true faith in God. At age 22, he had a vision in which God told him to be prepared to leave Ireland. Soon, he escaped, walking 200 miles to a ship and returning to England. In a dream, he saw the people of Ireland calling him, "We beg you, holy youth, that you shall come and shall walk again among us."

St Patrick sought clerical training. He was ordained by St. Germanus, bishop of Auxerre. Around 430 he was ordained a bishop, after which he returned to Ireland. There, he preached the Gospel, reaching tribal chieftains, gaining their permission to teach their subjects also. During his episcopate, he was attacked for a sin he confessed to a close friend, a sin he committed "in a single hour" when only 15, but he did not suffer as a result. He established an episcopal administration and led a monastic lifestyle, establishing Christianity in Ireland. St. Patrick died at Saul, Downpatrick, Ireland, on March 17, 461.