Abp. John Maximovitch in Tubabao
An influx of Russian émigrés fleeing the Soviet regime occurred during the American colonial regime. In 1935, a Russian parish was established in Manila, and the Patriarch of Moscow and All Russia appointed Father Mikhail Yerokhin as vicar. The Episcopal Church then permitted Fr. Mikhail to use the north transept of their cathedral for worship. In 1937, the first Orthodox church was built and was named after the Iveron Icon of the Mother of God. This also became the first Orthodox altar in the Philippines. Later, both the Episcopal Cathedral and the Russian Orthodox church in Manila were destroyed by American bombing during the Second World War.

In 1949, 5,500 Russian Orthodox from China, including then-Archbishop John (Maximovitch), were relocated to a former US Army base on Tubabao, in the south central Philippines by the International Refugee Organization and with the permission of the newly independent Republic of the Philippines. Under Archbishop John's direction a wooden church, orphanage, and other buildings were established on the grounds of the base, for the Russian refugees.

Tubabao, however, was (and still is) an underdeveloped island which is humid, prone to typhoons, and at times inaccessible due to the ocean conditions. When a Russian commented on their fear that a typhoon would destroy their camp to local Filipinos, they replied that there was nothing to worry about because "your holy man blesses your camp from four directions every night." There were no typhoons or floods while the Russian refugees sheltered at Tubabao.

Abp. John did not preach the Orthodox faith to the Waray-speaking inhabitants of Tubabao. No Filipino was baptized, chrismated, ordained or consecrated during the refugees' stay in the Philippines. Abp. John himself was only present for a few months, until the camp was set up and running; during most of the two years the refugees were at Tubabao, he was in America, lobbying the Congress for their reception into the USA. Through his persistent lobbying, the refugees were allowed to settle in the United States and Australia beginning in 1951. 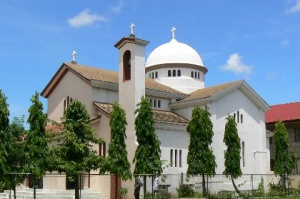 In 2007 the Antiochian Orthodox Christian Mission in the Philippines[4], was established under the Antiochian Orthodox Archdiocese of Australia and New Zealand. In 2008, two Filipino denominations were received into the Antiochian church, including 32 communities with some 6000 believers. These denominations - one ex-protestant, led by Fr Jeptah Aniceto, and one ex-independent, led by Fr Pascualito Monsanto - formed two vicariates, based in Davao and Manila respectively. In 2009 Jeptah Aniceto left the Orthodox Church to pursue native religious teaching in Africa, and now identifies as a Muslim. Many of his followers left the Antiochian Church; some connected with an Old Calendarist group under Bishop Kleopas (Daclan).

In 2013, clergy from both ROCOR and the Moscow Patriarchate responded to requests from Filipino groups for catechism. Two dioceses of the Iglesia Filipina Independiente ("Aglipayans" entered into a period of catechism, and beginning in 2015 several parishes were received in mass baptisms[5][6]. In 2017 a hieromonk was sent from Russia to reestablish the parish of the Iveron Icon of the Theotokos, originally established in 1935 but destroyed by bombing during World War II. In February, 2019, a Diocese of the Philippines was established within the Russian Orthodox Patriarchal Exarchate of Southeast Asia. Eight priests now serve the Russian mission which now numbers approximately thirty parishes and mission communities.