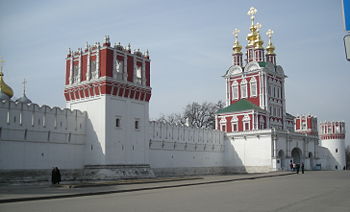 Novodevichy Monastery, also known as Bogoroditse-Smolensky Monastery (Russian: Новодевичий монастырь, Богородице-Смоленский монастырь), is located in the southwestern part of Moscow on bank of the Moscow River. Its name, sometimes translated as the New Maidens' Monastery, was assigned to differentiate it from the older maidens' convent, Ascension Monastery, in the Moscow Kremlin. Unlike other Moscow monasteries, it has remained virtually intact since the seventeenth century.

The Novodevichy Monastery was founded in 1524 by Grand Prince Vasily (Basil) III in commemoration of the conquest of the city of Smolensk in 1514. It was built as a fortress at a curve of the Moscow River and became an important part of the southern defenses of the capital, a ring of defenses that already included a number of other monasteries including the Donskoy Monastery. When it was founded, Novodevichy Convent was granted 3,000 rubles and ownership of the villages of Akhabinevo and Troparevo. Ivan IV later granted a number of other villages to the convent.

The nuns of Novodevichy were women from noble families. The convent was known to have sheltered many ladies from Russian royal and boyar families who had been forced to take monastic vows. These included Feodor I's wife Irina Godunova, Sophia Alekseyevna (Peter I's sister), and Eudoxia Lopukhina (Peter I's first wife). In 1610–1611, during the Time of Troubles, the convent was captured by a Polish unit commanded by Aleksander Gosiewski. Once the monastery was liberated, Tsar Michael supplied it with permanent guards (100 Streltsy in 1616 and increased to 350 soldiers in 1618) for defense.

The first abbess of the monastery was Elena (Devochkina), a nun from the Intercession Monastery of Suzdal. In the mid-seventeenth century, a number of nuns were transferred from Ukrainian and Belarusian monasteries to the Novodevichy Convent. In 1721, some aged nuns, who had left the Old Believers, were given shelter at Novodevichy. In 1724, the monastery housed a military hospital for soldiers and officers of the Russian army and an orphanage for female foundlings. By 1763, the convent housed 84 nuns, 35 lay sisters, and 78 sick patients and servants. Each year, the state provided the convent with 1,500 rubles, 1,300 loaves of bread, as well as 680 rubles and 480 loaves of bread for more than 250 abandoned children under the care of the nuns.

In 1812, after he had occupied Moscow, Napoleon's army attempted to destroy the convent on its departure, but the nuns discovered and extinguished the incendiaries and set fuses and managed to save the monastery from destruction.

In 1871, the Filatyev brothers donated money for a shelter and school for orphans of "ignoble origins". Also, the convent housed two almshouses for nuns and lay sisters. In early 1900s, the Smolensky Cathedral was surveyed and restored by architect and preservationist Ivan Mashkov. By 1917, there had been 51 nuns and 53 lay sisters in the Novodevichy Convent at the eve of the Bolshevik revolution.

In 1922, the Bolsheviks closed down Novodevichy Convent although the cathedral remained open until 1929, after which it was turned into the Museum of Women's Emancipation. By 1926, the monastery had been transformed into a history and art museum. In 1934, it became affiliated with the State Historical Museum while much of its facilities were turned into apartments, thus sparing the convent from destruction. In January 2010, the convent was returned to the Russian Orthodox Church under an order signed by Prime Minister Vladimir Putin.[[1]]

In 1943, when Joseph Stalin began to make overtures to the Russian Orthodox Church as a reward for its support in defense of the Russian lands against the Nazis during World War II, he sanctioned opening the Moscow Theological Courses school at the convent. The next year the program was transformed and became the Moscow Theological Institute. Since 1980 The Novodevichy Convent has been the residence of the Metropolitan of Krutitsy and Kolomna.

Although nuns returned to the convent in 1994, some of the churches and other monastic buildings are still affiliated with the State Historical Museum. In 1995, services resumed in the convent on patron saint's days.

The convent's main cathedral was consecrated in honor of the Smolenskaya Icon of the Mother of God Hodigitria, which according to legend was painted by St. Luke himself. This copy of the icon was brought to Russia from Greece in 1046 by Tsarina Anna Monomakh and was later taken to Smolensk and then to Moscow before it was returned to Smolensk in a ceremony held on the present-day site of the monastery. 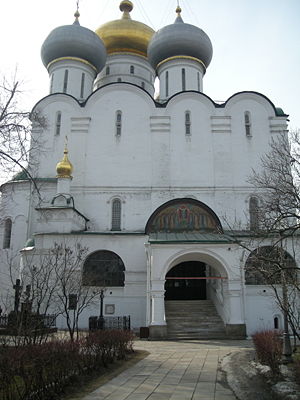 The six-pillared five-domed Smolensky Cathedral is the oldest structure in the convent. Documentation dates its construction to 1524–1525; yet its lofty ground floor, imposing proportions, and prominent central gable are typical of monastery cathedrals built at the direction of Ivan IV (the Terrible). Most scholars agree that the cathedral was rebuilt in the 1550s or 1560s; it was formerly ringed by four smaller chapels, in an arrangement reminiscent of the Annunciation Cathedral in the Kremlin. Its frescos are among the finest in Moscow.

While Smolensky Cathedral is the focal point of the monastery, but there are other churches within the walls, most of which date from the 1680s. At that time the convent was thoroughly renovated by the regent Sophia Alexeyevna (who, ironically, was be incarcerated there later). The blood-red walls and crown-towers, two lofty over-the-gates churches, a refectory, and residential quarters were all designed in the Muscovite Baroque style, supposedly by Peter Potapov. In the old cathedral, a new basin for holy water and gilded carved iconostasis were installed in 1685. Four tiers of the iconostasis contain sixteenth-century icons endowed by Boris Godunov while the fifth tier displays icons by leading seventeenth-century iconographers, Simeon Ushakov and Fyodor Zubov.

The monastery's belltower, that also was commissioned by Sophia, was built in six tiers to a height of 240 feet (72 meters), making it the second highest structure in eighteenth-century Moscow, after the Ivan the Great Bell Tower in the Kremlin.

Like other Moscow monasteries (notably the Danilov and the Donskoy monasteries) the New Maidens' Monastery was coveted by the Russian nobility as a place of burial. Sergey Solovyov and Alexei Brusilov are only two of the many prominent Muscovites buried within convent walls. The Napoleonic war hero Denis Davydov is also buried on the grounds. In 1898, the new Novodevichy Cemetery was opened outside the monastery walls in which Anton Chekhov was among the first of many Russian writers, poets, artists, and other notables, to be interred there. Later, Nikolai Gogol was also reburied in the new cemetery. During the Soviet years, it became the most high-profile cemetery in the Soviet Union, in which were buried Peter Kropotkin, Nikita Khrushchev, Sergei Prokofiev, Dmitri Shostakovich, Konstantin Stanislavski, and Boris Yeltsin, amongst others.