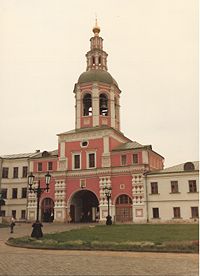 Church of St. Simeon the Stylite and Bell Tower over the Gate, St. Daniel Monastery, Moscow

St. Daniel Monastery, also Danilov Monastery - Russian: Данилов монастырь, located in Moscow, Russia, is the residence of the Patriarch of Moscow and All Russia. The monastery was founded by the Grand Prince Daniel about the year 1282. The monastery was closed by the Soviet government in 1930. The cemeteries were destroyed and the buildings re-fitted for secular use. After being returned to the Church of Russia in 1983, the monastery has been rebuilt and has become the spiritual center for the Russian Orthodox Church and the official residence of the Patriarch of the Church of Russia.

The monastery was founded by the Grand Prince Daniel at a site on the Moscow River about five miles from the Moscow Kremlin. This site, next to a wooden church of St. Daniel the Stylite, was the first monastery in Moscow. After his repose in March 1303, Prince Daniel, who had taken monastic vows late in his life, was buried in the monastery cemetery.

After the death of Prince Daniel, the monastery remained small for 250 years consisting only of a wooden church and a cemetery. Yet, the site of Prince Daniel’s grave became the scene of many miracles and cases of miraculous healings. This led to a revival of monastic life at monastery in the sixteenth century. During the reign of Ivan IV (the Terrible), construction began of the first church in the monastery built of stone: the Church of the Holy Fathers of the Seven Ecumenical Councils.

Since its founding, the monastery has been involved in many historical events. Situated to the south of the Moscow Kremlin, St Daniel Monastery played a role in the defense of Moscow against armies advancing on Moscow. In 1591, Tatars forces under the Crimean Khan Kazi-Girey were defeated before the walls of the monastery. In 1606, during the “Time of Troubles”, the rebel forces of Ivan Bolotnikov, were defeated by Tsar Basil Shuisky. In 1610, again during the Time of Troubles, the forces of the False Dimitri II (The Felon of Tushino) burned the monastery.

After the Time of Troubles ended with the enthronement of Michael Romanov as Tsar, the monastery was revived behind new brick walls. Later, during the French occupation of Moscow in 1812 the monastery was among the many churches and other religious places of Moscow that were robbed and desecrated. Among the items stolen from St Daniel Monastery by French soldiers was St. Daniel’s silver tabernacle.

In 1917, after the assumption of power in Russia by the Bolsheviks, Orthodox Christianity became severely restricted, including closing almost all churches and monasteries and martyrdom for much of the clergy. In 1930, St. Daniel Monastery was the last monastery closed in Moscow. After the Soviet government took control of the monastery it was rebuilt for secular purposes, Additionally, the graves of many prominent people in the St Daniel cemeteries were moved to other cemeteries. Besides St. Daniel, many prominent people had been buried in these cemeteries, including writer N. V. Gogol, the poet N. M Yazikov, the painter V. G. Perov, and the musician N. G. Rubinstein. It was during these times that the relics of St. Daniel were lost.

As restrictions by the government lessened in the 1980s, St. Daniel Monastery, in 1983, was the first property given back to the Russian Orthodox Church. Reconstruction of the buildings began soon afterward, in the architectural style of the seventeenth to the nineteenth centuries. The Cathedral of the Holy Fathers of the Seven Ecumenical Councils was restored which also included the Church of the Protecting Veil of the Mother of God on the ground floor. The restored iconostasis was done in the manner of the Kostroma school.

The largest church within the monastery, St. Trinity Cathedral was rebuilt with an interior styled after the original. The cathedral was originally built in 1838 by the architect O. Bove in a late classic style. The main altar was originally consecrated by the sainted Metropolitan of Moscow, Philaret (Drozdov). The regular Sundays and festive services are celebrated in the St. Trinity Cathedral.

The bell tower and Church of St. Simeon the Stylite had been re-built a number of times. Before the post-Soviet restorations, the tower was rebuilt in the 1910s to support very heavy bells. As the weight of the bells was so great a steel structure was used for the first time. In March 1924, the Bolshevik government decided to sell the bells. In 1930 when the monastery was closed, the 18 bells were sold to the American industrialist Charles Crane, who presents them to Harvard University in Cambridge, Massachusetts. When restoration of the monastery began in 1985, representations were made for return of the bells. This was accomplished in 2007. At that time, the original bells were replaced at Harvard by a set of new duplicates of the original bells by the Church of Russia.

Relics of St Daniel have been recovered. Part of the relics were returned to the monastery by Theodosius, the Archbishop of Washington, in 1986. Relics of the saint are now kept in the tabernacles of both the Cathedral of the Holy Fathers of the Seven Ecumenical Councils and St. Trinity Cathedral.

Official Residence of the Patriarch of Moscow and All Russia ("White House"), St. Daniel Monastery

The Monastery of St. Daniel is directly subordinate to the Patriarch of Moscow and All Russia. The monastery is his official residence and holds the offices of the Patriarchate.

Everyday operation of the monastery is in the hands of the Father Superior, presently Archimandrite Alexei. The brethren of the monastery participate in the religious services every day. They also participate in charitable affairs and affairs of mercy in hospitals, schools, orphanages, prisons and other places of need of spiritual care, as well as act as teachers in seminaries, academies, and secular schools.