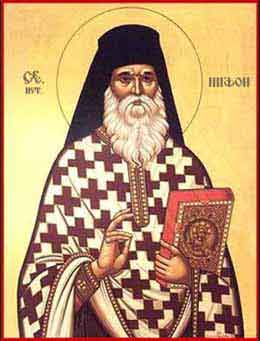 He was born in Messinia on the Peloponnese peninsula of southern Greece. His mother Maria, was a noble Greek woman and his father Emmanuel, a rich Albanian nobleman. His worldly name was Nicholas. He entered a monastic life as a monk at Epidaurus where he received the monastic name Nephon. He followed the monk Zacharias to the Monastery of the Theotokos at Ochrid and later moved to Mount Athos where he was ordained to the diaconate and priesthood. In 1482 he was consecrated as Metropolitan of Thessalonica following the death of Metropolitan Parthenios. At the end of 1486 he was elected to Patriarch of Constantinople.

His tenures as patriarch were during difficult times as various groups sought to gain favour in the sultan's court. He tried to correct corrupt practices and abuses by the clergy. Nephon was confronted by the many competing power groups within the church that made difficult his attempts to reorganize the patriarchate and that also resulted in his depositions and refusal of a third invitation.

In 1502, after refusing calls to ascend the patriarchal throne, he left the imperial city and returned to Mount Athos with his two disciples Makarios (who was martyed in 1527) and Joasaph (who was martyred in 1536). The hieromartyr James of Kastoria was also his disciple. At Mount Athos he concealed his episcopal rank and was assigned by the brethren to care for the community's animals. It was not long before his virtues attracted the brethren who soon discovered that he was formerly patriarch. The monks would flock to him to hear his counsel. Living as a simple monk, he taught with the example of his humility. God rewarded his humility, giving him the power to heal through his prayers. In this way the humble Nephon lived out the remainder of his days in peace.

Nephon's holiness and virtue were recognized by all, and immediatey after his death he was honoured as a saint. In fact, he was glorified only nine years later in 1517. His memory is celebrated on August 11. His holy relics are housed in a chapel dedicated in his honor in Dionysiou Monastery, while his skull and hand are in Romania where they were sent early in the 16th century as a blessing for the people of Wallachia.