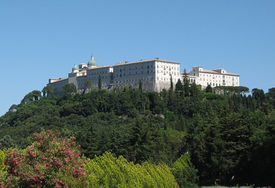 The Abbey of Monte Cassino, located about 50 miles (130 kilometers) south east of Rome, Italy, is a monastery of the Benedictine Order within the Roman Catholic Church. It was founded by St. Benedict of Nursia around the year 529. The monastery was sacked and severely damaged a number of times during its existence, the most recent time being during World War II in 1944.

St. Benedict founded the monastery at Monte Cassino when he moved there in the year 529 with a chosen group of monks to escape the unruly life of the monasteries in Subiaco. The site he chose on the mountain overlooking the ruined town of Cassinum (Cassino) was occupied by an abandoned temple of Apollo. Benedict's first act was to destroy the image of Apollo and the altar. On the site he built a church dedicated to St. John the Baptist and an oratory dedicated to St. Martin of Tours.

Once he had established himself at Monte Cassino, Benedict remained there for the rest of his life. It was during these years that he wrote the Rule that became a hallmark of Church of Rome monasticism. Nearby, his sister St. Scholastica established her monastery. After his death he was buried in same tomb with his sister whose repose proceeded him.

After Benedict's death, the monastery flourished until 580. In 580, Monte Cassino was pillaged and burned by Lombards. The monks who survived fled to to Rome where they established a monastery beside the Lateran Basilica. This monastery remained ill used for a hundred and thirty years. During this time Monte Cassino seemed not completely deserted, but apparently without a formal organization.

In 718, the abbot Petronax was given the task of restoring Monte Cassino as an active monastery. He proceeded to restore many of the buildings and built a new church over the tomb of St. Benedict. In 748, the church was consecrated by Pope Zachary, who also confirmed all the gifts given to the restored monastery and exempted it from episcopal jurisdiction.

In 884, the monastery was again overrun, this time by Saracens. While abbot Bertharius and some of the monks were killed, many fled to Teano. Restoration work began within two years, but most of the community of Monte Cassino monks remained at Teano until 949 when the community was fully reformed. Over the next one hundred years Monte Cassino's reputation reached its zenith from 1058 to 1087 under the rule of abbot Desiderius. The population of the monastery reached two hundred and its copyists and painters of miniatures became famous throughout Western Europe. The monastery buildings, including the abbey church, were rebuilt and enhanced by artists from Amalfi, Lombardy, and Constantinople. The restored monastery witnessed the grand consecration of the new Basilica of Monte Cassino on October 1, 1071.

Over the following years Monte Cassino experienced a steady decline as it became involved in re-curring political struggles in Italy. In 1230, the monks of the abbey were driven out by Frederick II, but were returned by Charles of Anjou. In 1294, Pope Celestine V attempted to induce Monte Cassino to follow the hermit-rule of the order of Celestines. In 1321, the church of Monte Cassino was made a cathedral by Pope John XXII of a new diocese of which the abbot of the monastery was made the ruling bishop.

The move became a disaster. The carefully preserved independence of Monte Cassino from episcopal interference ended. The bishops who were selected to lead Monte Cassino never visited the diocese, yet they appropriated the income of the monastery for their own personal use. In 1349, an earthquake damaged the monastery further contributing to its fall. The monastery, then, entered a period of decline during which the number of monks residing at the monastery dwindled. Pope Urban V, himself a former Benedictine monk, noticed this and moved monks from other communities to reinforce the Monte Cassino community.

In 1505, Monte Cassino was joined with the Monastery of St. Justina of Padua. In 1799, troops under Napoleon sacked the site, and it 1866, Monte Cassino was joined in the dissolution of monasteries in Italy. Made a national monument, the monastery suffered serious damage during the bombardments during the World War II Battle of Monte Cassino in February 1944, when the abbey was thought to be a German stronghold. After the war the abbey was rebuilt by the Italian government and re-consecrated in 1964 by Pope Paul VI.