Paul VI (Latin: Paulus PP. VI; Italian: Paolo VI), born Giovanni Battista Enrico Antonio Maria Montini (26 September 1897 – 6 August 1978), was the Pope of the Roman Catholic Church from June 21, 1963 to his death. He continued with the Second Vatican Council opened by his predecessor, John XXIII, and improved the relations of the Roman Catholic Church with Orthodox, Anglicans and Protestants.

Relation with the Orthodox Church 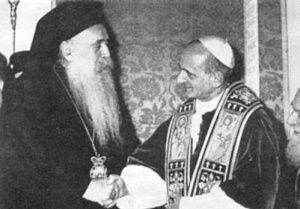 Paul VI and Athenagoras I

In 1964 Paul VI met with the Ecumenical Patriarch of Constantinople, Athenagoras I, in Jerusalem. There, both leaders lifted the mutual Bulls of Excommunication that resulted in the Great Schism of 1054. It became a significant step towards restoring communion between the churches of Rome and Constantinople. A Catholic-Orthodox Joint Declaration was publicly read on December 7, 1965, simultaneously at a public meeting of the Second Vatican Council in Rome and at a special ceremony in Istanbul. The declaration did not end the schism, but showed a desire for greater reconciliation between the two churches. Athenagoras I visited PaulVI in Rome on October 28, 1967.

Also, Paul VI met with the Orthodox Patriarch of Jerusalem. In May 1973, the Coptic Patriarch of Alexandria Shenouda III went to the Vatican three times to see Paul VI.