From OrthodoxWiki
(Redirected from Meletios IV (Metaxakis) of Constantinople)
Jump to: navigation, search 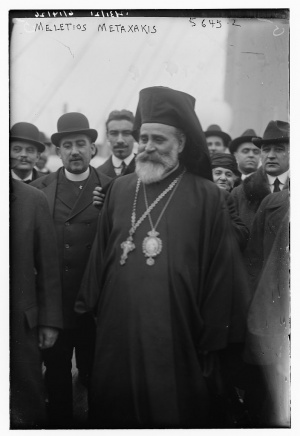 He was born on September 21, 1871, in the village of Parsas on the island of Crete. He entered the Seminary of the Holy Cross in Jerusalem in 1889. He was tonsured with the name Meletius and ordained a hierodeacon in 1892. He completed the theological courses at Holy Cross and was assigned as secretary to the Holy Synod in Jerusalem by Patriarch Damianus in 1900.

Meletius was evicted from the Holy Land by Patriarch Damianus, along with the then-administrator Chrysostomos, later Archbishop of Athens, in 1908 for "activity against the Holy Sepulchre." Meletius Metaxakis was then elected Metropolitan of Kition in Cyprus in 1910. In the years before the war, Metr. Meletius began successful talks in New York with representatives of the Episcopal Church of America, with the intention of "expanding relations between the two Churches."

After the death of Patriarch Joachim III on June 13, 1912, Meletius was nominated as a candidate for the Patriarchal Throne in Constantinople. However, the Holy Synod decided that Meletius could not canonically be registered as a candidate. Instead, he would continue in his metropolis until 1918 when, with the support of his political allies, he was elevated to the position of Archbishop of Athens in 1918. This would be a temporary measure, for after a series of political changes in Greece, he was later deprived of his see.

A staunch supporter of Greek Prime Minister Eleftherios Venizelos, his fortunes were linked with those of the Venizelists. The expulsion of King Constantine in 1917 allowed Meletius' installation as Archbishop of Athens, but the 1920 electoral defeat of Venizelos allowed the king's return and Meletius' deposition. His replacement as Archbishop was the Royalist Archbishop Theocletos, the man whom he had displaced two years previously.

During his tenure as Archbishop, he tried to apply order to the patchwork of independent "trustee" Greek parishes in America by applying a 1908 Patriarchal decree that gave episcopal oversight of the Americas to the Church of Greece, and even visited America in the summer of 1918 to survey the situation. Upon his return to Greece three months later, he appointed Bishop Alexander of Rodostolou as his resident American legate. Alexander was delegated the unenviable task of initiating canonical order among the independent Greek parishes throughout North America.

While Archbishop he also journeyed to England where he conducted talks concerning the union between the Anglicans and the Orthodox Church.

Following his deposition, Meletius, like so many other political refugees, fled to the United States in February 1921. Still recognized as the legitimate head of the Church of Greece by his American legate, Bishop Alexander, Meletius presided over the organization of some Greek parishes in North America into a formal "Greek Archdiocese" on September 15, 1921. In effect, this was the first step towards the establishment of the Greek Orthodox Archdiocese of North and South America, which was incorporated in 1921, and officially recognized by the State of New York in 1922.

In another twist of fate, the exiled Meletius was elected Ecumenical Patriarch two months later on November 27, 1921. He was not about to give up his American creation, however, and in one of his first acts as patriarch, he repealed the 1908 Tomos on March 1, 1922. This effectively transferred jurisdiction of the new Greek Archdiocese from himself, as Archbishop of Athens, to himself, as Ecumenical Patriarch. His justification for this move was a reference to Canon 28 of the 451 Council of Chalcedon, which he claimed granted the Ecumenical Patriarchate jurisdiction over Orthodox Christians in all "barbarian lands." This was formalized on May 11, 1922, when Meletios declared the Church of America as an Archdiocese and appointing the Rt. Rev. Alexander Titular Bishop of Rodostolon, as his Patriarchal Exarch.

Unfortunately, the hopes of the immigrant Greek community that their long canonical disorder in America would be settled was not realized. The royalists in Greece rejected both the creation and subsequent separation of a "Venizelist" Archdiocese in America. Metropolitan Germanos (Troianos), a royalist partisan, was sent from Greece to challenge Alexander for control of the new archdiocese. Spurred on by the two New York Greek language dailies, the Royalist Atlantis, and the Venizelist National Herald, the fledgling Greek Archdiocese rapidly disintegrated into violently opposed factions. It would remain bitterly divided for almost a decade (1922-1931) until the moderating influence of the future Patriarch Athenagoras.

His entreaties to the Anglican Church courted controversy within Orthodoxy. On December 17, 1921, the Greek Ambassador in Washington sent a message to the prefect at Thessaloniki stating that Meletius "vested, took part in an Anglican service, knelt in prayer with Anglicans, venerated their Holy Table, gave a sermon, and later blessed those present."

Under pressure from Meletius, the Patriarchate of Constantinople accepted the validity of Anglican orders in 1922—an act against which even Rome protested. Then, in 1923, Meletius initiated the "Pan-Orthodox" Congress (May 10–June 8). On June 1, clergy and laymen who were dissatisfied with the innovating Patriarch held a meeting which ended in an attack on the Phanar with the goal of deposing Meletius and expelling him from Constantinople.

On July 1, 1923, on the pretext of illness and the need for medical treatment, Meletius left Constantinople. On September 20, 1923, under pressure from the Greek government and through the intervention of Chrysostomos I (Papadopoulos) of Athens, Meletius retired as patriarch. This coincided with the failure of the Greek expedition in Asia Minor, and may have also played a role.

After his retirement from the Constantinople Patriarchate, he was elected Pope and Patriarch of Alexandria and All Africa and was enthroned as Meletius II of Alexandria on May 20, 1926. He served until his death on July 28, 1935, and was buried in Cairo, Egypt.

According to a listing of famous Greek Freemasons on the official website of the Grand Lodge of Greece1 (Megali Stoas Tis Ellados), Meletius Metaxakis is listed as a Freemason in the Lodge: "ΑΡΜΟΝΙΑ" (HARMONY):

Metaxakis was one of the most fascinating characters in Orthodox church history. He was the only man successively to lead three autocephalous (independent) Orthodox Churches: those of Greece, Constantinople, and Alexandria; and to rule a diocese in another, that of Cyprus.