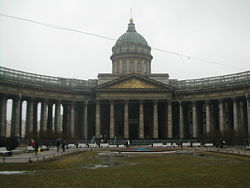 In 1710, Tsar Peter I ordered a copy of the Icon of Our Lady of Kazan that he had placed in a chapel in Petrogradskaya Side. The icon was later moved to a wooden church of the Nativity of the Virgin Mary. In 1733, to replace the wooden church, Empress Anna Ionnova ordered a stone church, also dedicated to the Nativity of the Virgin Mary, built on the present site of the Kazan Cathedral on Nevsky Prospect. This church, which was dedicated on June 17, 1737, became the home of the much revered Icon of Our Lady of Kazan that Peter I had ordered. The church became the main church of St. Petersburg. The church was where Empress Catherine II became an Orthodox Christian and married her husband, Emperor Peter III. By the end of the century the church had been granted the status of a cathedral, but had become dilapidated. On ascending the throne in 1796, Emperor Paul I ordered a new larger cathedral to be built to house the national icon as a replacement for the church of the Virgin Mary.

The construction of the new cathedral began on August 27, 1801 and continued for ten years. The architect, Andrey Voronikhin, modeled the new building after St. Peter's Basilica in Rome. The new building had a larger dome, and porticos, with a semicircular colonnade of Corinthian columns on the north side of the basilica. A similar colonnade was planned for the south side of the building, but was never built. There are three entrances to the cathedral, on the north, south, and west sides of the building. Although the Russian Orthodox Church strongly disapproved of the plans to create a replica of the Roman Catholic cathedral in Russia's then capital, many courtiers supported Voronikhin's Empire Style design. All the materials used in building the new cathedral were of Russian origin. The official consecration of the Kazansky Cathedral took place on September 15, 1811. 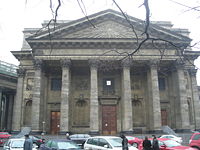 After Napoleon invaded Russia in 1812, and Mikhail Kutuzov, the commander-in-chief of the defending Russian army, asked Our Lady of Kazan for help, the church's purpose was to be changed. With the defeat of Napoleon's army, General Kutuzov’s appeal to the cathedral’s wonderworking icon changed the purpose of the cathedral, to a perception of cathedral as primarily a memorial to the Russian victory against Napoleon. In 1813, Kutuzov died and his body was interred in the cathedral’s north chapel, a chapel that began to be seen as a monument to the 1812 war. Alexander Pushkin wrote celebrated lines meditating over his Kutuzov sepulcher. In 1815, keys to seventeen cities and eight fortresses were brought by the victorious Russian army from Europe and placed in the cathedral's sacristy. In 1837, Boris Orlovsky designed two magnificent bronze statues of Kutuzov and Barclay de Tolly that were placed in front of the cathedral.

Many of Russia’s leading artists and sculptors contributed to the construction of the cathedral. These included sculptors S.S. Pimenov, I.P. Martos, and V.I. Demut-Malinovsky; iconographers V.K. Shebuev, A.E. Egorov, A.I. Ivanov, and V.L. Borovikovsky; and relief sculptors on the façade I.P. Martos, I.P. Prokofyev, and F.G. Gordeev. A new golden frame was made for the Icon of Our Lady of Kazan, one that was decorated with precious stones. 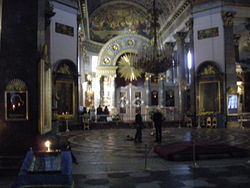 Kazan Cathedral, Main Iconostasis with the Icon of Our Lady of Kazan to the left of the Royal Doors

The congregation of the Kazan Cathedral was active in charitable works in St. Petersburg. From 1870, a charitable society associated with the congregation maintained a school and orphanage, a free cafeteria, an alms-house, housing for the poor, and a dacha (summer residence) near Sestroretsk for poor children.

After the Bolshevik ascension to power in 1917, the devastation of the cathedral began. The cathedral’s dean, Father F. N. Ornatsky, and his two sons were martyred in September 1918. In 1922, all church valuables, including liturgical vessels and silver decorations on the icon-stands, were confiscated by the Soviet government. On December 26, 1931 the cathedral was closed and transferred to the Academy of Science that, in 1932, reopened the edifice as the pro-Marxist "Museum of the History of Religion and Atheism." In 1940, the Icon of Our Lady of Kazan was moved to the St. Prince Vladimir Cathedral. After World War II some restoration work was performed: During the period of 1950 to 1956 the interior was restored and between 1963 and 1968 the facades were also repaired.

It was in 1990 that the cathedral began to see a restoration of religious life that began when a festive thanksgiving service and requiem was held at the tomb of Gen. Kutuzov on Christmas day. On November 4, 1990, the first Divine Liturgy was held in the cathedral. In 1991, joint used of the cathedral was agreed to with the museum authorities. On April 30, 1994, the cross was restored on the dome. Permanent clergy were assigned to the cathedral during 1996, and amid a partially restored south side chapel Metropolitan Vladimir conducted the first liturgy with city and cathedral clergy on July 21, 1966. On March 29, 1998, the whole cathedral was consecrated by Metr. Vladimir concelebrated with the cathedral and city clergy. 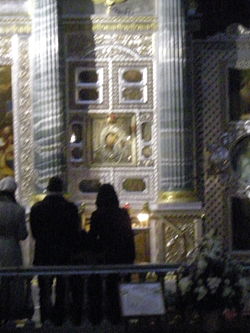 The Icon of Our Lady of Kazan in the Kazan Cathedral in St. Petersburg.

On July 21, 2002, the long expected return of the Icon of Our Lady of Kazan to its historic place at the main iconostasis of the Kazan Cathedral took place.