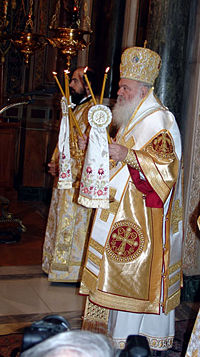 Archbishop Ieronymos serves Liturgy on the day of his enthronement

His Beatitude, the Most Blessed Ieronymos II (Liapis) of Athens is the Archbishop and primate of the Church of Greece. His enthronement took place on February 16, 2008.[1]

Born Ioannis Liapis in 1938, Ieronymos is a graduate of the School of Philosophy and the School of Theology of the University of Athens, followed by Byzantine studies on a nationwide state scholarship, and post-graduate studies in Austria and Germany.

He was academic assistant to the great archaeologist Anastasios Orlandos, founding member and later president of the Archaeological Society of Athens, and was a teacher of literature at the Leontios School in the Nea Smyrni suburb of Athens, as well as at high schools in Athens and Avlona. He set aside his academic career after entering the clergy.

Ieronymos served as Coadjutor Metropolitan of Thebes & Levadeia from 1967-78, where he was unanimously elected Metropolitan in 1981, after serving as abbot of two monasteries (1971-1981) and as secretary and later Chief Secretary of the Holy Synod of the Church of Greece (1978-81).

The overwhelming majority (82 of the 110) priests in his metropolis (Thebes and Levadeia) are degree-holders in theology with a second degree (in fields such as literature, architecture, medicine, informatics education, education, and economic sciences) making it the first metropolis of the Church of Greece to have clergy of such a high level of education.

Under his term as Metropolitan of Thebes and Levadeia and through his guidance, six monasteries (with a total of 45 monks) and 17 convents (with a total of 110 nuns) were renovated and staffed. He has also written numerous articles, studies, and books on theological, social, and historical topics, while his book Medieval Monuments of Evia received the Athens Academy's top award in 1970.

His social work also includes the founding of boarding schools, orphanages and introduction of the institution of foster families, shelters for the elderly, rehabilitation centres for the mentally challenged, a training centre for the creative occupation of children with special needs in cooperation with prefectural agencies, a drug prevention centre, food kitchens for the poor, including economic immigrants, consulting centres, and a Centre of Historical and Archaeological Studies, while, as a former academic, he had developed a special relationship with the teaching community in Viotia.

Other improvements in the Metropolis of Thebes and Levadeia include a model camping facility on Mt. Parnassos. At his initiative the Viotia History and Culture Research Centre was founded, which collaborates with the universities of Durham and Cambridge.

Ieronymos was also a protagonist in the creation, in his home town of Oinofyta, of a Population Awareness Centre on environmental and economic immigrants' issues. He has been awarded an honorary Ph.D. from the University of Craiova, in Romania, and is also president of the Hellenic Heart Foundation (ELIKAR), a public benefit foundation.