Holy Theophany Church in Nagoya, Japan is the latest church structure for the Orthodox Christian community of Nagoya. The church design is in a distinct medieval Russian Style with three vaults on the west front and four on the south. The church was dedicated in January 2010. 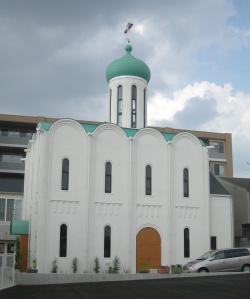 Orthodox Christianity first came to Nagoya in the seventh year of the Meiji era. The parish community has it beginnings in 1874 when Gregory Miyamoto Manju, a catechist and disciple of St. Nicholas of Japan began evangelizing in Nagoya during which the first convert, Paul Kondo Seibei, was baptized. By 1877, catechistic lessons were under way in six separate houses in Nagoya. In 1881, the celebration of the Nativity of Our Lord was attend by fifty four people.

During these early years the Nagoya community was served by the priest from the Okazaki parish. In 1881, a chapel was built in a traditional Japanese house. The chapel dedicated to the Annunciation was located in the middle of Nagoya. In 1899, Peter Shibayama was ordained the priest to serve the Nagoya parish. Fr. Peter came from a samurai family and was a master of the Japanese tea ceremony.

The Russo-Japanese War of 1904-1905 brought the parish community into contact the Russians who were prisoners of war and held in five camps in the Nagoya area. Fr. Peter frequently visited the camps to service the Divine Liturgy for the prisoners. At times some of the prisoners were able to attend the services at the Annunciation chapel. He also celebrated funerals for those prisoners who died before their repatriation. Today, fifteen graves of Russian prisoners still remain in Heiwa Koen Park over which the parish still celebrates memorial services (pannikhída). In a token of appreciation, Fr. Peter was later presented a Gold Cross from Tsar Nicholas II.

In 1913, the first church was built in Nagoya. The new church, with two stories, was consecrated in September 1913 by Bishop Sergius (Tikhomirov) the Bishop of Kyoto. After the Great Kanto earthquake of September 1, 1923, the Annunciation parish lost Fr. Peter who was transferred to Tokyo to take part in the reconstruction of the Resurrection Cathedral that was seriously damaged in the earthquake.

The parish was adversely affected during World War II as the parish church was burned down in an air raid in March 1945, disrupting parish life until a simple chapel was erected in a different area, a suburb of Nagoya called Yamahana-cho. The chapel was used until 1972 when a new church, dedicated to the Annunciation, was built. The new Annunciation church served the parish well over the following years, but began to be inadequate after the fall of the Soviet Union as people from the Balkans and Russia came to Japan to work. By the time of the twenty first century arrived, the capacity of the church was being reached. As many as 120 people have appeared for Paschal services.

For the past few decades discussions took place on expanding the church, resulting, finally as the new century began, in preparation for building a new, larger church for the parish. After buying land in the Yamawaki-cho area of Nagoya in 2006, construction began on the medieval Russian Style multi-story church in 2009 under the oversight of the parish priest, Fr. George Matshushima. On January 11, 2010, the new church, dedicated to the feast of the Holy Theophany, was consecrated by Metr. Daniel (Nushiro) of Japan and Bishop Seraphim (Tsujie) of Sendai.

The basic structure of Holy Theophany Church is of reinforced concrete with an interior accented with Japanese cedar panels and boards from the Chubu area. The Byzantine style chandelier is made of wood. Many icons in the interior of the church are gifts from churches and monasteries of various countries.