Golgotha (Greek: Κρανίου τόπος (Kraniou Topos); Latin: Calvariae Locus; Aramaic: Gûlgaltâ; Church Slavonic: паннихида, pannikhída - all denoting "place of the skull") is the place where Christ was crucified just outside the walls of old Jerusalem. Golgotha is also the name given to the representation of the crucified Jesus in the form of an icon.

The possible source of the word Golgotha has been attributed variously. The name "Golgotha" could have been adopted since, historically, this place may have originally been a place of public executions where the skulls of the executed could be seen or, perhaps the name may have been derived from a neighboring cemetery, or it may have been connected with the shape of the ground, a hill which may have resembled a skull. According to tradition, Golgotha was the burial place of Adam's skull [1] and a shrine exists at this site. The location was identified in 326 AD by Empress Helen, the mother of Constantine the Great. It was on the northwest side of the ancient city.[2]

The Church of the Holy Sepulchre is built around the ground venerated by Orthodox and non-Orthodox Christians as "Golgotha" (known in the West as the Hill of Calvary) which the New Testament records Jesus Christ was crucified citation needed. 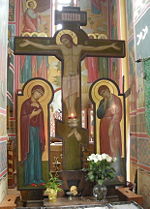 In Orthodox Churches, a Golgotha is a large iconic representation depicting the crucified Jesus often with the Theotokos (Mother of God) and John the Beloved Disciple standing to either side of him. During the year, the icon is placed off to one side in the front of the nave of the church where Pannikhidas will be chanted.

During Holy Week the Golgotha may be repositioned especially during the Matins of Great Friday.