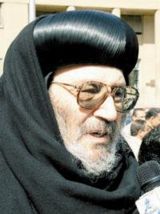 Makram Eskander Nicola (His Eminence's name before consecration) was born on 19th July 1942. He completed his senior school in 1958, and in 1959 joined the Faculty of Engineering (Mechanics Division) in Alexandria, Egypt, as a student. In 1963 he graduated with a Bachelor Degree at the age of 21 years, and was appointed Assistant Lecturer at the Faculty of Engineering (i.e., member of the academic faculty). Before leaving the world to become a monk, he decided to complete his Master's Degree in Mechanical Engineering, which he received on 28th May 1968. Two days after the Faculty's ratification of his Master's Degree results, he left on the day of Ascension (30th May 1968) to become a monk in the Coptic Orthodox monastery of the Blessed Holy Virgin Mary that is famous by the name of Deir Al-Sourian.[2]

Before leaving to the monastery he was pressured to become a married priest in Damietta, Egypt, but he refused. He was also offered to study and complete a Doctorate Degree in Engineering abroad, which he again refused.

On 16th February 1969 he became monk in Deir El-Sourian, and was named Toma El-Souriani (Thomas of Al-Sourian Monastery). Then against his will, he was ordained a priest on Palm Sunday 1970, as he did not desire any priestly rank in the monastery. He was later ordained a hegumen priest on 17th August 1972.

On 24th September 1972 he was enthroned against his will by His Holiness Pope Shenouda III as the Bishop of Damietta, Kafr El-Sheikh and the Monastery of Saint Demiana, Barrari, Belkas. On Sunday 2 September 1990 His Grace Bishop Bishoy was elevated to the rank of Metropolitan in the Cathedral of Saint Athanasius the Apostle in Damanhur, Egypt.

Involvement in ecumenical dialogue with other Churches

For details, reports (in English) and photographs, interested readers are referred to http://www.metroplit-bishoy.org/english/Dialogues.htm

Despite His Eminence's very active and commendable involvement in fruitful ecumenical dialogues with other Churches (leading the representation of the Coptic Orthodox Church in these dialogues), he is frequently criticized by many because of his rather strong words against non-Orthodox Churches (and the salvation of their faithful),Arabic audio excerpt and also against those whom he labels as heretics or heterodox over dogmatic matters he disagrees with.[3]

In March 2007, the Roman Catholic Church and the Protestant Churches in Egypt officially and publicly protested in the newsmedia against Metropolitan Bishoy's teachings that Catholics and Protestants will not be saved. The issue was widely covered in the mainstream secular newsmedia in Egypt, e.g., this Egyptian newspaper article and this second one from the same newspaper (both articles are in Arabic).