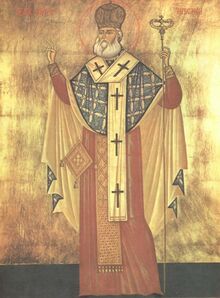 Our father among the saints Hieromartyr Antimos of Iberia was a Georgian scholar who as Metropolitan of Wallachia invigorated Christianity in the area that now is Romania. A person of considerable artistic ability, he inspired the printing industry of the area, as well as encouraging the liturgical usage of the Romanian language. He is commemorated on September 14 in Romania and on June 13 in Georgia.

Born in the Samtskhe region of southern Georgia, the son of Ioane and Mariam, Antimos Iverieli was given the name Andria at baptism. His childhood is largely unknown. He developed his artistic talents, becoming well known for his paintings, engravings, and calligraphy.

Antimos accompanied King Archil on a trip to Russia, where he helped the king establish a Georgian print shop. On his return to Georgia he was captured by Dagestani robbers and sold into slavery. He was freed through the efforts of the Patriarch of Jerusalem, Dositheus, and remained in the patriarch’s service while furthering his spiritual education.

Famed for his artistic and printing skills, Antimos, about the year 1691, was asked by Prince Constantine Brincoveanu of Wallachia to come to Wallachia. After arriving, Antimos became the driving force in the development of the printing industry in Wallachia, making it a major publisher of books in the eastern European area. In 1694, Antimos was appointed abbot of the Snagov Monastery, in what is now Romania, and established a new print shop there. On May 21, 1694, the shop published his Guidelines for the Divine Services. This volume was signed by Subdeacon Michael Ishtvanivich, his pupil, who was to establish the first print shop in Georgia in 1709. In 1710, this Georgian shop printed the Gospels in the Georgian language.

Fluent in many European and Oriental languages, Antimos soon gained proficiency in the Romanian language. In 1693, he published the Gospels in Romanian and encouraged the use of the Romanian language in the local churches as the official liturgical language, thus implementing his expressed position to render the services in a language the people understood.

In 1705, Antimos was consecrated bishop of Rimnicu Vilcea. Then, in 1708 he was appointed Metropolitan of Hungro-Wallachia. During the following years, Antimos directed a building program of more than twenty churches and monasteries in Wallachia, including All Saints Monastery in the heart of Bucharest. Today, this monastery is known as Antim Monastery in his memory. The main gates of the monastery were designed by Antimos himself using Georgian motifs. As metropolitan, he established the rules for the monastery and declared its independence from the Church of Constantinople.

On September 14, 1716, while en route to his place of exile, Metr. Antimos was ambushed by Turkish soldiers on the bank of the Tundzha River, near Gallipoli, as it flowed through Adrianople, and butchered him. Then, they threw his remains into the river. This brutal action ended the earthly life of a great man who had dedicated his strength, talent, and knowledge to the revival and strengthening of Orthodox Christianity among the people of Wallachia.

A scholar as well as an hierarch, Metr. Antmos was committed to a Christian community that understood the teachings of the Church through services in the local languages. He recognized the importance of the use of the new printing presses as part of religious education. The extent of his efforts is witnessed in the literature that he wrote himself, as well as sponsored. Besides translations of the Gospels into Romanian and Georgian, Metr. Antmos published at least twenty-five other books in the Romanian language as well as others in Church Slavonic, Greek, and Arabic. These included bilingual volumes such as the Greek-Arabic Missal he published in 1702. In addition he published many of his sermons including the collection, the Didahiile, a commentary that criticized sharply the contemporary habits and morals.

Coupled with the intellectual side of his life, he took active leadership in spreading the Faith through a building program of churches and monasteries. While his martyrdom cut short his many talents, his memory lived on. In 1992, the Church of Romania recognized his memory by glorifying him and establishing September 14, the day of his death, as his commemoration day. Later, the Church of Georgia also recognized its son and his work and commemorates him on June 13.