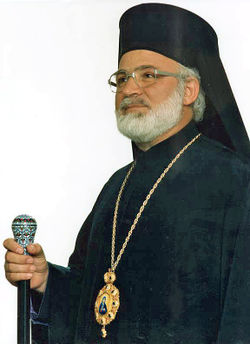 His Eminence Metropolitan Anthony (Gergiannakis) of San Francisco (Αντώνιος Γεωργιαννάκης) was the first bishop of the Diocese of San Francisco of the Greek Orthodox Archdiocese of America after it was created in the general reorganization of the archdiocese in 1979. Previously, he was the titular Bishop of Assimos, assigned to the Eighth Archdiocesan District in Denver, Colorado in 1978. In the redesignation of dioceses as metropolises in 2002 he was designated Metropolitan of San Francisco.

Metropolitan Anthony was born on March 2, 1935, in the village of Avgeniki on the island of Crete, the third of six children, and grew up during the German occupation of World War II. For his early education he attended the ecclesiastical school of Chania, Crete. He continued his education at the Halki Theological School in Turkey, graduating in 1960. While at Halki he was ordained a deacon on July 27, 1958.

On September 29, 1960, he was ordained a priest. After his ordination as a priest he emigrated to the United States of America. While serving as a parish priest, he earned a Master of Divinity degree from Yale University. He continued his studies for a doctorate at the University of Chicago and the University of Wisconsin.

In 1974, he was appointed Dean of St. George Cathedral in Montreal, Canada, where he served until his elevation to the episcopate. On May 21, 1978, he was consecrated titular Bishop of Amissos. As Bishop of Amissos, Bp. Anthony served the Eighth Archdiocesan District in Denver, Colorado until 1979.

He served as the Bishop and later Metropolitan of San Francisco for over twenty-five years, overseeing the western states of California, Arizona, Nevada, Oregon, Washington, Alaska, and Hawaii.

During his tenure at San Francisco, Metr. Anthony led the expansion of ministries and programs of the diocese. His tenure saw the founding of over twenty new parishes and missions in the Metropolis of San Francisco, nearly one parish for each year of his ministry. In addition he saw the establishment of three monasteries. He initiated the establishment of St. Nicholas Ranch, the Greek Orthodox conference and retreat center located in the Sierra Nevada foothills. He was also the driving force behind the construction on the premises of St. Nicholas Ranch of the Monastery of the Theotokos the Life-Giving Spring.

He initiated the Bishop Anthony Student Aid Endowment Fund, a multi-million dollar scholarship account that provides funding for seminarians and students from the Metropolis to attend Hellenic College and Holy Cross School of Theology in Brookline, Massachusetts. He also served as a member of the Holy Eparchial Synod of the Greek Orthodox Archdiocese of America.

Metr. Anthony passed away on December 25, 2004 in San Francisco at the age of 69, five weeks after being diagnosed, in November, with Burkitts Lymphoma[[1]], a rare form of cancer.