Yesehaq (Mandefro) of the Western Hemisphere 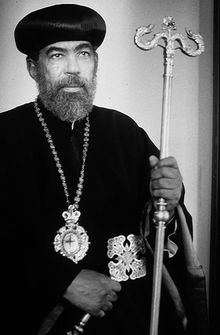 Archbishop Yesehaq Mandefro (Abuna Yesehaq), 1933-2005, a leader in the diaspora of the Ethiopian Orthodox Tewahedo Church.

His Eminence Archbishop Yesehaq (Mandefro) of the Western Hemisphere, also Abuna Yesehaq or Father Isaac (born Laike Maryam Mandefro in 1933 in Adwa, Ethiopia - died December 29, 2005 in Newark, New Jersey), was a leader of the Ethiopian Orthodox Tewahedo Church in the Western Hemisphere. A monk of Debra Libanos, he arrived in the West Indies from Africa in 1970 and initiated an extraordinary period of evangelisation and conversion.[1] He also undertook missionary journeys throughout the Western world and in 1979 was made Primate of the Church of Ethiopia in the Western Hemisphere.[1] In the early 1990's he split his congregations in the Americas from the mother church in Addis Ababa during the political upheaval in Ethiopia. He was credited with forming more than 70 congregations, with more than 300,000 members throughout the Caribbean and elsewhere.[2]

Archbishop Yesehaq was also the hierarch who baptized Jamaican singer-songwriter and musician Bob Marley (†1981) into the Ethiopian Orthodox Tewahedo Church in Kingston, Jamaica, on November 4, 1980.[3][4]

Archbishop Yesehaq was born Laike Maryam Mandefro to an Ethiopian Orthodox family in 1933. He grew up in the Debra Libanos monastery from the time he was three years old.[5] Attending liturgical schools in Ethiopia, he excelled in spiritual knowledge as well as in secular studies, and was ordained a deacon and priest there.[2] He was one of the clerics fortunate enough to be tutored personally by Emperor Haile Selassie I, the titular head of the Church.[2]

Coming west, he first went to Buffalo and later to New York City to continue his divinity studies, receiving advanced degrees in religious education and theology,[2] including a Doctorate of Divinity from Princeton University (School of Theology), St. Vladimir's Russian Orthodox Seminary, and a degree in Psychology and English Literature from NYU.[6]

Abba Laike Mandefro, as he was then known, was originally appointed by the Emperor Haile Selassie and was sent to the Americas in 1962 to tend to Ethiopians principally in the United States and Jamaica.[2] Since October 1959, the Ethiopian Orthodox Church had officially established a branch in New York, and Abba Laike Mandefro was given the task of finding a more suitable building for the Church, which was purchased in 1966. However when Mandefro returned to Ethiopia to seek assistance for renovations, the building was claimed by the New York City authorities in his absence. With the assistance of Emperor Haile Selassie however, and the Ethiopian consulate in New York, Mandefro returned to New York City and purchased another site for the Church in 1969.

In Jamaica and the Caribbean

Abuna Yesehaq's work in the Caribbean began after Emperor Haile Selassie I visited Jamaica in 1966 (i.e. Grounation Day) and was thronged by local Rastafarians, who saw Selassie as a modern-day messiah. According to church leaders, Selassie denied being a deity and urged Yesehaq to try to draw the Rastafarians to the Ethiopian church.[7] Upon his return to Ethiopia from Jamaica, Emperor Haile Selassie I spoke to Abuna Yesehaq, Hieromonk of the Ethiopian Orthodox Church abroad, and declared:

"There is a problem in Jamaica.... Please, help these people. They are misunderstanding, they do not understand our culture.... They need a church to be established and you are chosen to go."[4]

Thus in 1970 Abuna Yesehaq was sent to Jamaica where he began to minister specifically to the Rastafari community, at the official invitation of Rasta elders including Joseph Hibbert, who was in turn named as a "Spiritual Organizer" by Mandefro. In the course of a year he baptized some 1200 dreads and laid the foundation for the church's subsequent growth. He also encountered fierce opposition from those Elders who taught that Haile Selassie was Jah in essence and demanded "baptism in Ras Tafari's name". In Montego Bay, only one dread accepted Orthodox baptism; Laike Mandefro baptized him Ahadu -- "One Man".[8]

Many government officials and others in Jamaica were deeply disappointed that Abba Mandefro defended the Rastafarians' faith on many occasions, and that he baptised thousands of them, pointedly refusing to denounce their faith in Haile Selassie as the returned Christ. On the other hand, a large number of other Rastas were likewise disappointed because he would not baptise them in the name of the Emperor, but only in the name of Jesus Christ. This however did not disturb those Rastas who viewed Christ and Haile Selassie as one and the same, and readily underwent baptism at the hands of this man who had been sent from Ethiopia by their living God.

Only after the Marxist Derg Revolution toppled Haile Selassie (on September 12, 1974)[note 1] and appointed their own Patriarch over the Church, did the requirement become enforced for prospective baptisees in Jamaica to renounce his divinity and cut their dreadlocks.

In 1979 he received the title "Archbishop Yesehaq of the Western Hemisphere and South Africa".[2]

Archbishop Yesehaq was perhaps best known to the non-religious world as Godfather and spiritual adviser to Bob and Rita Marley and their children.[9]

In a November 25, 1984 newspaper interview with Archbishop Yesehaq done by Barbara Blake Hannah in the Jamaica Gleaner's Sunday Magazine (The Sunday Gleaner), titled "Abuna Yesehaq Looks Back on 14 Years of Ministry in Jamaica", the Archbishop said the following about Bob Marley's baptism, which had taken place on November 4, 1980:

"Bob was really a good brother, a child of God, regardless of how people looked at him. He had a desire to be baptised long ago, but there were people close to him who controlled him and who were aligned to a different aspect of Rastafari. But he came to Church regularly. I remember once while I was conducting the Mass, I looked at Bob and tears were streaming down his face...When he toured Los Angeles and New York and England, he preached the Orthodox faith, and many members in those cities came to the Church because of Bob. Many people think he was baptised because he knew he was dying, but that is not so...he did it when there was no longer any pressure on him, and when he was baptised, he hugged his family and wept, they all wept together for about half an hour."[3][10]

When Bob Marley died in 1981, Archbishop Yesehaq presided over his memorial service at the National Stadium in Kingston.[9] According to the reminiscences of Juliet Wilkinson, a friend of the Archbishop, Abuna Yesehaq had prayed for Bob in an all-night vigil the day before the funeral, chanting in the ancient Ethiopian languages of Geez and Amharic:

"He was praying for Bob. He sang from about nine in the evening until the crack of dawn. I don't know if you have ever heard these languages but it was like listening to the angels sing. It was beautiful."[9]

Holy Synod in Exile of the Ethiopian Orthodox Church

When Patriarch Abune Paulos was elected in 1992 under the new government of the Ethiopian People's Revolutionary Democratic Front (EPRDF), the incumbent Patriarch Catholicos of All Ethiopia Abune Merkorios and his supporters went into exile, establishing a rival synod in the United States, thus creating a schism in the Ethiopian Orthodox Tewahedo Church.[note 2]

Abuna Yesehaq refused to recognise this political change, pointing out that according to the ancient Church canons, the Church leaders are to remain in office until they pass away, and cannot be dismissed or reappointed by any secular government; and that Ethiopian Orthodox canon law does not allow for the dethronement of a patriarch except on the grounds of heresy. Thus he declared the Western Hemisphere branch independent of Addis Ababa rather than accept the pre-eminence of the new patriarch, Abuna Paulos.[2] In the ensuing dispute over the authority of the two prelates, adherents of Archbishop Abuna Yesehaq clung to their own interpretation of canon law and continued to follow him, instead of the patriarch in Addis Ababa.[2]

However, the New York City authorities took the side of the newly-appointed Patriarch, and police interrupted a Church service on August 9, 1998 with guns drawn, using profanity, handcuffing children, and taking possession of the Church in the name of Abuna Paulos.

Abuna Yesehaq died on December 29, 2005 at the Newark Beth Israel Medical Centre, Newark, New Jersey, USA, at the age of 72.[5] His death was announced by a spokesman for the archbishopric in Dallas, where he had recently moved his seat, and by Father Haile Malekot of the Ethiopian Orthodox Church in Kingston, Jamaica.[2] The Archbishop was buried in Jamaica in accordance with his personal wishes:

"The most important reason he is being buried in Jamaica, is because he came here on a mission specifically directed by His Majesty, Emperor Haile Selassie I, to establish the Ethiopian Orthodox Church. This was because of the love the Jamaican people have for Ethiopia and His Majesty," said a spokesperson of the church.[5]

His funeral at the National Arena in Jamaica on January 20, 2006 drew hundreds of mourners including Jamaican politicians, celebrities and members of the Rastafarian community, and was marked by lengthy rituals of liturgical drumming and chanting in the ancient Ethiopian languages of Geez and Amharic.[9]

His Mausoleum is in Kingston, Jamaica, at the Holy Trinity Ethiopian Orthodox Church on Maxfield Ave.[11]

Abba Mandefro founded many Oriental Orthodox Churches throughout the Caribbean and elsewhere, being credited with forming more than 70 congregations, with more than 300,000 members, many of them in the Caribbean.[2] Besides establishing the EOC in Jamaica in 1970 with branches islandwide,[note 3] he also established chapters in England, Canada, South Africa, Trinidad and Tobago, the US Virgin Islands, Guyana, St Kitts and Bermuda.[5]

In particular he is credited with introducing Ethiopian Orthodox Christianity to Rastafarians throughout the Caribbean region, baptising an estimated 45,000 of them into the church.[9] According to Norman Hugh Redington, editor of the St. Pachomius Library, many people would add that Abuna Yesehaq was an "Apostle to the Caribbean."[8]