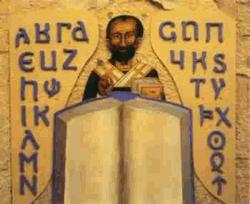 Wulfila converted many among the Visigoths and Ostrogoths, preaching an Arian Christianity, which when they reached the western Mediterranean, set them apart from their overwhelmingly Orthodox neighbors and subjects. Many believe that it was the ongoing Arianism of Gothic Christianity that eventually led to the addition of the Filioque to the Nicene-Constantinopolitan Creed at the Council of Toledo, Spain in 589, in a creedal attempt to bolster the divinity of the Son of God.