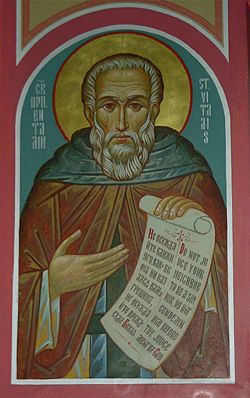 The Venerable Vitalius of Gaza

The Vitalius the Venerable, also Venerable Vitalius of Gaza was a monk who in his later years sought out, in secret, harlots in the city of Alexandria and, praying for their redemption, urged each as individuals to change from their lives of sin. Having admonished them to not reveal his influence on their change in life style, Vitalius was met with scorn by the people for his association with these harlots. He is commemorated on January 11 and April 22.

His early life is unknown other than he was a monk of the Monastery of St. Seridus who arrived in Alexandria, Egypt in the early seventh century when St. John the Merciful was Patriarch of Alexandria. When he was sixty years old he began a extraordinary task among the prostitutes of Alexandria. After recording from memory the names of these prostitutes, he began to pray for their redemption and worked to earn twelve copper coins each day. Each night he would buy a single bean that he ate and the remaining coins he would give to one of the harlots, whom he visited at night, begging her to take the money and to not sin with anyone that night. The Elder would then stay in her room while she slept, praying and reading the Psalms, before leaving quietly in the morning.

Each day he visited, in turn, a harlot while making them promise to keep secret the reason for his visit. The people of Alexandria, watching Vitalius’ behavior, became indignant and accosted and berated him. This he endured, answering only that they not judge others. Vitalius’ efforts and prayers had their effect as many of the fallen women turned to new lives. Some went to monasteries, others got married, while others obtained respectable work. But they were forbidden by Vitalius to tell the true reason they changed their lives.

One women, who defended Vitalius, began to back out of her promise. But, she immediately fell into a demonic frenzy, which reinforced the people’s opinion of the sinfulness of the humble Vitalius. Clergy scandalized by the behavior of the saintly monk went to Patr. John to complain. John did not believe their stories and reminded the clergy of how St. Constantine the Great handled letters of denunciation from attending hierarchs at the First Ecumenical Council by burning them, unread, saying that only if he had seen the sins himself would he take action. Thus, the wise Patr. John shamed the complainers.

As the venerable Vitalius continued his difficult work leading prodigal prostitutes to repentance while in a guise of a sinner himself, he was accosted by a young man, who with an insult, struck the saintly monk on the cheek and yelled that he was a disgrace to the Name of Christ. Vitalius answered him: “Believe me, that after me, humble man that I be, you shall receive such a blow on the cheek that will have all Alexandria thronging to your cry.”

Some time later Vitalius died in his small cell. At that moment a terrifying demon appeared before the young man who had struck the humble monk. The demon struck the man and cried out, “Here is a knock from St. Vitalius.” The young man went into a demonic frenzy and thrashed around on the ground, tearing his clothing and yelling loudly, so loudly that he action attracted a multitude of people. Hours later when he recovered his senses, he ran to Vitalius’ cell, yelling “Have mercy on me, O servant of God, for I have sinned against you.” Reaching the saintly monk’s cell, now in full recovery of his senses, he told those around him of his earlier encounter with St. Vitalius. After he did not receive an answer to his knock on the cell door, they broke the door and found that Vitalius was dead, on his knees before an icon. In his hand was a scroll inscribed, “Men of Alexandria, judge not beforehand, til cometh the Lord, the Righteous Judge.”

Among those who came to the cell was the woman was possessed by a demon as punishment for wanting to break her vow of silence about Vitalius’ work. When she touched his body she was healed and was able to tell all of what had happened to her. Then, joining all the women whom he had helped, they told everyone about the virtues and mercy of St. Vitalius.

Patr. John, who rejoiced that a righteous man had not been condemned, led the burial procession through the city and gave the saint’s remains a reverent burial, while the people of Alexandria made themselves a promise not to judge anyone.