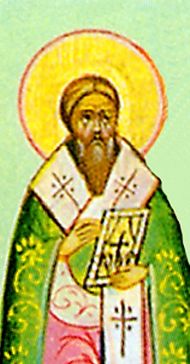 Tryphon was a monk, living in Constantinople, from the time of his youth. He was distinguished by his meekness, lack of malice, full submission to the will of God, and firm faith and love for the Church. After Patriarch Stephanus died in 928, the monk Tryphon was approached by emperor Romanus I Lecapenus with an offer of an appointment as "locum tenens" of the Patriarch of Constantinople with the condition that he resign when Romanus' son Theophylactus came of age to be consecrated patriarch. Tryphon meekly accepted the burden of patriarchal service and for three years he wisely governed the Church.

In 931, when the emperor considered Theophylactus to have come of age, the emperor told Patr. Tryphon to resign the patriarchal throne. Tryphon, however, did not consider it proper to hand over the throne to such an inexperienced youth and refused to do so. Unable to intimidate Patr. Tryphon, since his life was blameless, the emperor was infuriated and wanted to arrest him and execute him, but Tryphon was very much loved by the people for his virtues. Then, emperor Romanus turned to the cunning counsels of Bishop Theophilus of Caesarea.

Bp. Theophilus went to Patr. Tryphon and deceitfully began to urge him not to comply with the emperor and not to resign the patriarchal throne. He began to advise the patriarch to take beforehand a measure of caution and dispel the impression held by the emperor about his illiteracy. And to do this Bp. Theophilus craftily suggested to Patr. Tryphon to write down on a clean sheet of paper his full name and title, and then give it to the emperor. Not perceiving the fraud, the guileless patriarch at a Council of bishops took a clean sheet of paper and put on it his titled signature: "Tryphon, by the Mercy of God the Archbishop of Constantinople, and of New Rome the OEcumenical Patriarch".

When the paper was presented to the emperor, he ordered the Imperial clerks to write above the patriarch's signature: "I hereby resign the position of Patriarch, because I consider myself unworthy of this office." When this false document was then read before the imperial dignitaries, servants removed Tryphon from the patriarchal chambers. When Tryphon found out that he had been deceived it was too late, Theophylactus had been already proclaimed Patriarch on February 2, 933.

Tryphon patiently endured the injustice done to him. He returned to his own monastery where he lived as a simple monk for a year before his death in 933. His body was returned to Constantinople and buried with the Patriarchs.